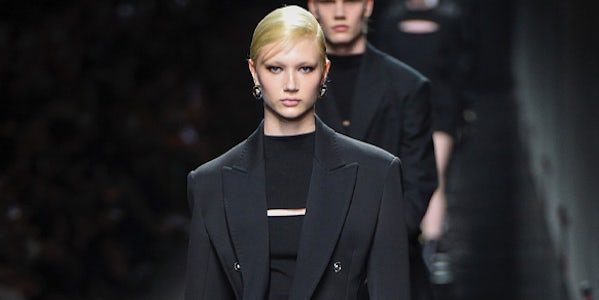 MILAN, Italy — Donatella Versace put her men’s and women’s collections together on the catwalk for the first time on Friday night, but there was a whole world besides. “Sensuality comes from the brain,” she declared in a pre-show press conference, and that idea of the physical calculatedly shaped by the cerebral was a theme.

Her invitation was a mirror. Look at yourself! The world’s favourite subject in the age of Selfie Dominatus. When we took our seats, a digital wall was playing the audience back at itself. At first, it was a straight reflection. Then it began to undulate and warp, like an image of a brain surrendering to lysergic intrusion, or maybe the after-effects of too much narcissism. A good fifteen minutes of fun for the whole fashion family before the show started, perhaps even a happy/sad chemical memory for a few of them.

It played like an invitation on Donatella’s part to open our minds to what was to come, which was Planet Versace in multiple manifestations. Too many. Like, nearly a hundred. Spectacular on one level, but furiously diffuse on another. Bleached androids opened the show. Numanoids, they would have been labelled in another, New Wave-ier moment. If you missed the point, there was an aural cue on the soundtrack: Numan’s hit Cars. But New Wave rolled on through red houndstooth and blanket check, and still on into power pop motifs, rugby stripes, red and blue, rah-rah skirts, shoulders, a kind of new Clueless. It was like the Versus collection Donatella never got to do in the days when she did Versus collections. Then, she had the hottest bands of the moment providing live accompaniment. Now, she had a DJ doing a brilliant job of matching huge dance tracks to the ever-changing moods of the digital wall: op art pulse, liquid gold swirl, Medusa mutating.

Around about the time we were solidly tripping, acidic florals claimed the catwalk. Then, lurex-striped tailoring and patchworked leathers and denims. The sportiest puffas were followed by tuxes with slashes held together by gold rings (a metaphor screaming for psychoanalysis). He and she wore identical hot pink suits. And, in the end, as red mutant eyes gazed down on Hunger City, there was Kendall Jenner in a molten silver hourglass.

Did I say too many? Too much? It is not Donatella’s assignment to be all things to all people. Her triumphs in the past few years have been the coups that are closest to her heart. There was plenty of evidence of those affections here, and then there was an army of other lovers. Every award-winning movie director has the back-up of a good editor. Why should it be any different in fashion?