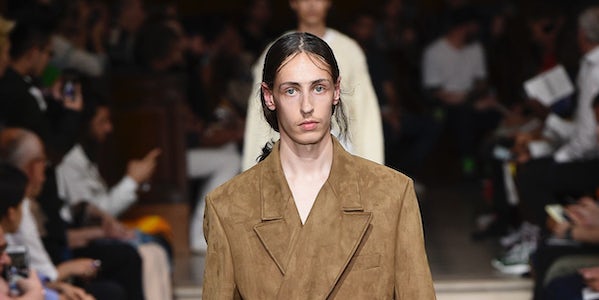 PARIS, France — After last season’s Santa Maria Novella cloisters extravaganza at Pitti, Glenn Martens must have still been in clerical mode. Or something like that.

Understandably, as there is something marvellously soothing and also elevating about staging a show in a church. Today, Y/Project took over the Oratoire du Louvre, in the middle of the afternoon, and the natural light gave a glow to a collection that, while being consistent to the codes and the technicalities that define the identity of the brand, marked a further step forward, towards a new classicism.

Well, classicism à la Y/Project: twisted to the point of perversion, technically speaking. The creative process for Martens is steeped in construction, not in the illusionism of styling: that’s what makes him a creative force to be reckoned with. But he is also very good at image making: he has invented an easy to identify kind of man, a sort of outlaw with an elegant swagger, a suburban dandy with a grin. This season, this character was looking particularly dapper, decked in tailored pieces that never ceased to morph, mould and liquify. Martens has a way of capturing movement and opening the possibilities of cloth that is unique. As a young master, he deserves kudos, even more so because he is not screaming for attention.