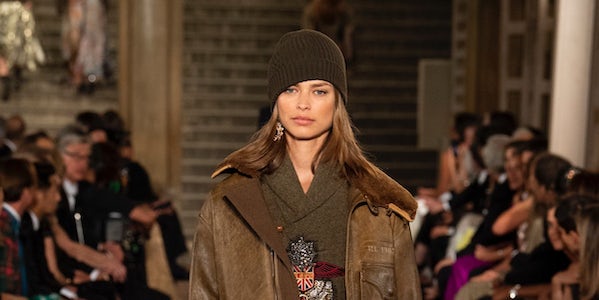 NEW YORK, United States — It’s true what they say: it was spectacular.

For his 50th anniversary celebration, Ralph Lauren spared no expense. Staged on Central Park’s richly ornamented Bethesda Terrace, the milestone came with dramatic LED displays, steaks specially flown in from Lauren’s own ranch in Colorado and an unmatched guest list.

But it was Oprah Winfrey’s toast, one self-made billionaire paying tribute to another, that distilled Ralph Lauren’s role in American culture.

“When I first moved to Chicago and was making enough money to pay my rent… and still had something left over, I thought I was a success,” she said. “My idea of celebrating that success wasn’t to go out and get a fancy car, or art or jewellery — I did that later. My idea of acknowledging my success, the fact that I had made it, was Ralph Lauren towel… I had been aspiring to that idea for over 10 years.”

Aspiration. That’s what Lauren sold to Winfrey, and to the rest of us, too. For me, it was a fragrance that sat on my grandmother’s dresser in the mid-1980s. The design of the bottle — squared-off mahogany glass, etched with gold lettering and topped with a round gold cap — dazzled me. I still think about it.

Friday’s runway show, the centrepiece of the festivities, was a tribute to Lauren’s influence, with G.I.Flow & K.I.N.G.’s 2014 ode to the designer — “You know it don’t count if it don’t say Ralph Lauren, right?” — injected between Springsteen and Neil Diamond on the loudspeakers.

Typically, Ralph Lauren shows start strong, then unravel. There’s a letdown moment that betrays just how much relevance the brand has lost since its peak years in the in the 1980s and early 1990s. This season, that didn’t happen. The styling was much looser, and Lauren’s decision to, for the first time, interweave three of the company’s collections — women’s ready-to-wear, men’s Purple Label and rugged Double RL — paid off.

Next came Polo, the sporty, colour-packed more accessible line. It was utterly transformed by the arrival of ex-Céline design director Michael Rider, who joined Ralph Lauren as creative director of the women’s Polo collection in February, and this was the real treat.

The first look — a pink Oxford shirt, varsity sweater, worn jeans, a pair of turquoise earrings, cowboy boots and a camel overcoat — was perfect. No irony, no affectation. The same went for a Fair Isle v-neck layered over a rugby shirt and a pair of rolled-up chinos, topped off with a leather bomber that looked like it could be one of Lauren’s own. No wonder the models were smiling.

The kind of prep for which Ralph Lauren is best known can often be manicured to the point of discomfort. But it’s no longer chic to look so rigid. What the designer did tonight was prove that he can loosen up and live outside the strict confines of that vision. Here’s to hoping Ralph Lauren takes more big, emotional swings like this as it fights to regain relevance with consumers.