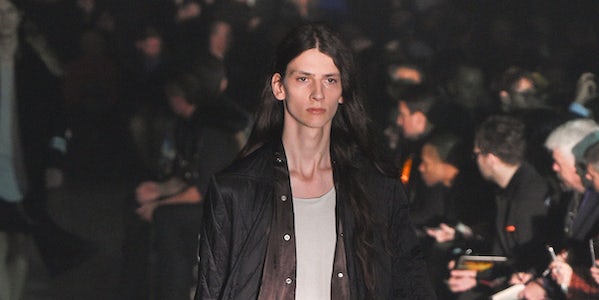 PARIS, France — Happiness runs in a circular motion. Rick Owens was a 15-year-old misfit living in Porterville, California, dying to be dissipated, ordering a KISS T-shirt from the fan club to feel a little bit closer to the image of sex, lust and vice the band projected with the help of their costumer Larry LeGaspi. Now here we are, 40 years later, with Rick about to publish his book on LeGaspi, and a new collection on the catwalk dedicated to Larry… and the glory of lust and vice.

LeGaspi married art deco and campy sci-fi, two of Rick’s passions, in his costumes, first for Patti Labelle, Nona Hendryx and Sarah Dash in Labelle. Then, after he’d changed the look of black soul culture, he drove KISS straight into the heart of American high schools. Subversive? Believe it. Owens was only one of millions of kids who was seduced by “the silver black sleaze Seventies thing,” as he calls it. He claims it helped set him free. The book and the collection make a formidable thank you.

Just how umbilical the connection between the two designers really was became obvious during the show. Ever wondered why Rick’s models often have faces whited out? Think back to Paul Stanley and Gene Simmons, faces like Kabuki masks. Of course the huge silvery duvet vest looked like a LeGaspi original from Nona Hendryx’s closet, but it has also been a quintessential Rick piece over the years. The KISS silhouette — the fitted body, the sharp shoulder, heading south to a stonking great platform boot — also gelled with the way Owens has never accepted standard human proportions as a given. You could see LeGaspi’s flamboyance as an earlier era’s revolt against Owens’s bêtes noires, “squeamish conservatism and easy outrage.”

Would LeGaspi identify with Owens’s insistence that he himself is “a minimalist who believes in a ridiculous flourish?” His signature stark monumentalism was in full effect with trousers so wide they had “ballgown volume.” Consider them as Rick’s transmuted love of old Hollywood. It’s always on display in his coats. Here, one sleek beauty had a silvery stand-up collar and lacquered canvas pockets adding a subtle bellow to the silhouette.

But there is change afoot. As much as “lust and vice” have worked their dissolute magic on Owens his whole life, he acknowledged that with age has come responsibility. “Not regretting the excess, but finding a balance.” Alongside the platform boots, he showed sneakers by Veja, 100 per cent vegan. Owens played a big part in turning Sneakerworld into a feeding frenzy of overscaled extremes. “Now I need to find a new way of doing this,” he said. “I love the idea of responsibility. I’m promoting that message. It’s the way we need to move forward.”

The notes that Owens supplies for each of his shows have become steadily more detailed over time. That’s how we learned that the runway was lit by a 1940s DCA searchlight used by the Allies on the beaches of Normandy in 1944. The designer said he’d wanted “a glam Hollywood spotlight” but this seemed like a more timely reminder that, however bad we think these times to be, they could always be worse. LeGaspi himself died of AIDS in 2001, and also on Owens’s mind was the decimation of his generation. Elegy is something he does very well. It often loans his work a shadowy melancholy. Here, however, there was vibrant colour, like shades of sunset. It’s an elegiac time of day, to be sure, but the saturated tones lifted the shadows.