LONDON, United Kingdom — The videos and stills made by the New Zealand-born artist Sharna Osborne don’t look like anything else in the fashion world — or at least not like anything else being produced today, this decade, or this millennium. What reads at first as nostalgia in her work — nostalgia for 1980s and ‘90s style video imagery, perhaps (and specifically the heavily-duplicated VHS tapes of your favorite early MTV videos) — quickly leads the viewer to something else, to an awareness of the surfaces of the image: the flattened, washed-out cyan and magenta tones of early video, yes, but also of the materials by which the images were made and on which they were displayed — the clunky cameras spinning a wheel of tape, the convex screen of an 80s television… To the point that, after watching her videos and scrolling through the stills which she has drawn from them, I, for one, become convinced that Osborne’s pictures are almost as much about the tools and mechanisms by which they were made as they are about their subjects.

“The texture of her image cuts against anything saccharine and it’s just really interesting,” says Francesca Burns, the stylist and co-founder of Print, who recently collaborated with Osborne on a 260-page zine insert. “I loved [her work] because there is something nostalgic about it but not at all retro. I find her images very sexy but not objectifying the subject there is real honesty there. They’re also incredibly feminine but not passive: the colour tone, the girlishness… but the grit.”

That grit, the texture she gets from her tools, Osborne tells me, down a phone line, is important, as are the tools themselves. But not in any retro fetish sort of way. It’s just that they can help her to forget that she is using them to make her work and so operate on a more instinctive level. The machinery, she says, “needs to be physically an extension of me so I’m not self-conscious when I’m using the tool and I’m not over-thinking anything.” Come to think of it, the artefacts she’s creating are really incidental to this process. “I could have landed on anything,” she says, with a little smile in her tone. “But somehow I landed here. It’s not really that conscious.” And once she’s out on the other end of the project, only then can she sort out what she’s made and why. “I think that’s how I do all of my discovering: through making, and then hindsight enlightens me.” 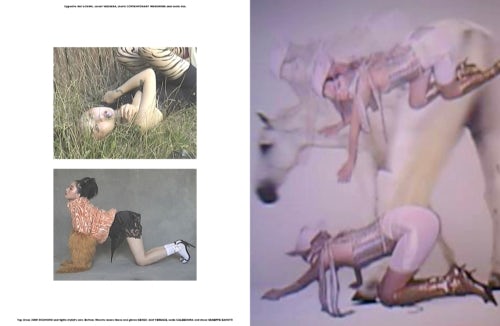 Growing up in rural New Zealand, Osborne had a lot of time to roam, to play, to think, and to fantasize — necessities, all, she says, to avoid the doldrums or discomfort of her solitude — and all of which comes to bear on the process she still uses. “It was just about me being able to fluidly disappear into [a fantasy world],” she says. “When I was young, I would pick up a bunch of sticks and, with that, I could create a world. The tools I use now are sort of the same.”

From building a Narnia with twigs to using a super-8 camera for a video of Mariah Carey — as she did for a recent issue of Love magazine —  is the same magic, she seems to be saying. And Osborne’s particular magic has landed her squarely in the centre of a lively generation of creators in London, her home for the last ten years and where she is a member of fashion’s new guard.

“Sharna’s fine art approach to photography and film becomes quite radical when put into the commercial context of fashion,” says London- and Paris-based photographer Thomas Lohr. “Rather than compromising in her aesthetic in order to meet the standards of commercial photography and filmmaking, she managed to get big brands to buy into her world vision.”

In the last year or so, Osborne’s work with super-stylist and Love editor Katie Grand, including on the Mariah Carey story, have caused a stir of attention. She has worked on videos for Miu Miu, editorials for Document Journal and Novembre, and was one of the first wave of artists to contribute to the relaunch of the British style and culture bible The Face. But she has described her fashion commissions, specifically the snickeringly sexual film she did with Martine Rose, as the most complete expression of her aesthetics and abilities. Perhaps that is because, even if she is shooting still images, she is always conceiving of the story as a moving narrative.

“I used to study Matthew Barney’s work non-stop,” she says by way of explanation. “The stills more than his films, because the films are a painful experience. I wasn’t interested in how he got to be on a big expanse of ice with a horse or whatever it was. I was fascinated that the imagery that I found so beautiful and so incredible was essentially a by-product of his film making.”

As you can imagine, in the present media climate, Osborne thinks a lot about format, platform, and medium. Lohr says Osborne’s success “highlights the shift away from print to online and social media,” not that she’s ready to give up on any platform just yet.

“There needn’t be any hierarchy among images — still or moving or whatever — today,” Osborne says. “I think that’s a really important thing with the way we view imagery. Because you know, lots of the moving image work I do is five-second loops for Instagram and sometimes I find that more interesting than if I had a one-minute platform to do something.” Which leads us to something of a discovery about her process: obstructions. Working within limited parameters. “Like me using VHS,” she says. “It’s like, ‘Here’s your brief and here’s your set of utensils.’ So, then, how do you communicate within that?”

After her decidedly bucolic childhood, Osborne went to school for fine art. “I studied at a kind of inconsequential school,” she says. “It wasn’t like a good art school or anything, but, literally, I was the only student that really focused. And I hung out with my teachers. I went to galleries with them and I learnt so much. I mean, I’m almost grateful that I went to this strange place, because I was very well looked after. Probably because I cared about what I did.”
She probably cared more about the work, she says, than wherever it was she would live. Ending up in London was a bit of a lark but looks a whole lot like luck in retrospect. “The night I arrived,” she says, “it was Princess Julia’s 50th birthday. So, you can imagine the crowd that that brought. It was brilliant. It was perfect timing, and it sort of sums up what I landed into.” What she landed in was, for her, the very opposite of a culture shock. She’d traveled half way around the world to finally meet her people. 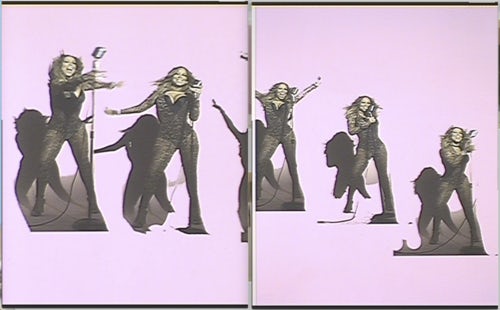 “You know when something’s not right,” she says, “you keep searching and you just trust that process. So, I moved from a small town to a bigger city to study, and then I moved to Australia, then I moved to London simply because a friend said, ‘Come.’ I had nothing to lose. And as soon as I landed, I found all of these inspiring weirdos — weirdos in that they were just being themselves, with all the eclecticism that comes with that. That, in itself, was inspiring. I worked at a gay bar. And, being gay, and your boss is gay, everyone knows you’re gay: even that was a thing for me. Where I’m from, you just don’t have that. Washing dishes at Dalston Superstore, I was always just revelling in the ability to be myself that comfortably. That was step one — before even applying things to work. The work was quite a slow process, I think. I did some bits and bobs until it became what it is now.”

Or anyway that’s how it appears to her in hindsight, with memory or maybe modesty doing their thing in miniaturising the steps along the way. Steps like, when she first arrived in London, being immediately incorporated into a very open and fertile creative community. As she describes those early days, “A bunch of these cool young designers were doing things that really blew my mind.” Edward Meadham and Benjamin Kirchhoff were two of those designers. “And they were like, ‘come with your video camera and do some stuff,'” she says. “So, I kind of landed at this really nice time, which has now crumbled, but that was really inspiring for me.”

It has been quite a landing. Now it’s her time.

Chris Moore on 60 Years of Photographing the Catwalk

Paolo Roversi: ‘Photography Is the Revelation of Another Dimension’