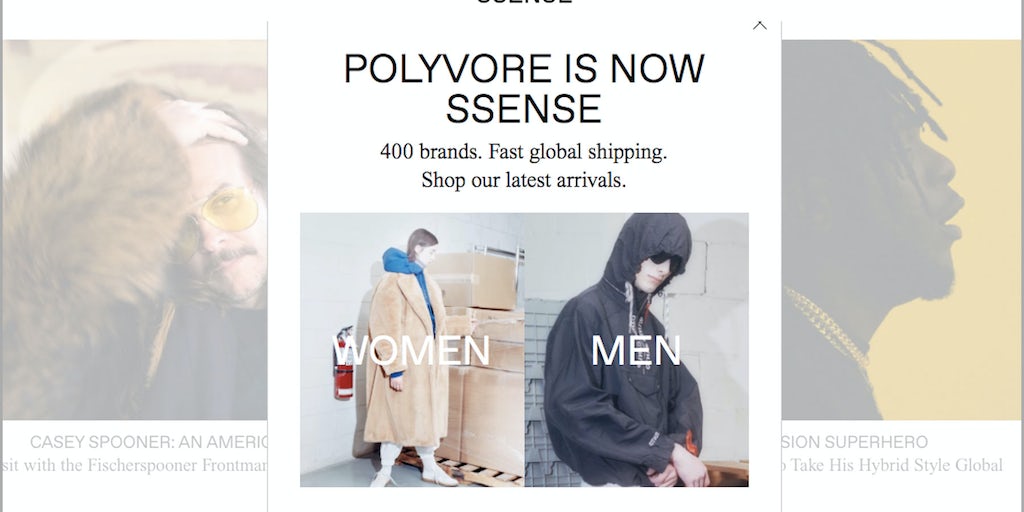 Visitors to Polyvore are taken to a version of the Ssense homepage | Source: Polyvore.com

Polyvore fans responded with a torrent of tweets decrying the move, as well as an online petition asking Montreal-based Ssense to reverse its decision that had received over 800 signatures Thursday afternoon in New York.

Polyvore had a cadre of loyal users who created and shared virtual “mood boards,” including outfits and shopping wish lists. Members described themselves as a tight-knit community, and some said they were scrambling to find other ways to contact friends from the site who they had known for years.

Lauren Coates, a high school student who started the online petition to “Bring Back Polyvore,” said she had used the site for four years “not just as a fashion site but as a way to communicate with people I’ve met online, as well as to publish my stories.”

Representatives for Ssense declined to comment beyond the press release announcing the acquisition. On Twitter, the company said “we’re excited to share our directional collection of the most coveted labels in the world.” It also shared directions for Polyvore users to download their content and messages, with a deadline of May 10. Several Polyvore users told BoF they were unable to complete this process Thursday afternoon.

“I would be alright with a name change, but the website has lost all semblance of what it used to be,” she told BoF. “I started the petition because I want the site back, plain and simple. They’re offering people a way to download their sets, but I can’t contact my friends or create new content.”

Polyvore was founded in 2007, and claimed 20 million active monthly users in 2012. However, the site’s membership appeared to have declined since its acquisition by Yahoo for about $200 million in 2015. The site’s worldwide traffic ranking was 3,294 according to Alexa, down from around 2,000 a year ago. Yahoo, and Polyvore with it, was acquired by Verizon and merged with AOL to form Oath last year.

A representative for Oath, did not immediately respond to a request for comment.

Lauren Dillow said she was active on the site off and on for eight years. She said the community where she was most active was smaller than in its heyday around 2012, but still had thousands of active users and was attracting new members.

“I feel incredibly crushed that the website is gone,” she said. “It meant so much to me growing up and I’m heartbroken that not only all my hard work and creativity, but the memories I’ve made as well are all gone.”

Visitors to Polyvore are taken to a version of the Ssense homepage, where a popup displays the message “Polyvore is now Ssense,” above links to the site’s men’s and women’s shops.

Another Polyvore user named Alyson Perry said the way the site was shut down without warning was unprofessional.

“There was no forewarning at all, and no consultation of it’s users.” She says she does not plan on shopping from Ssense because it is too expensive.