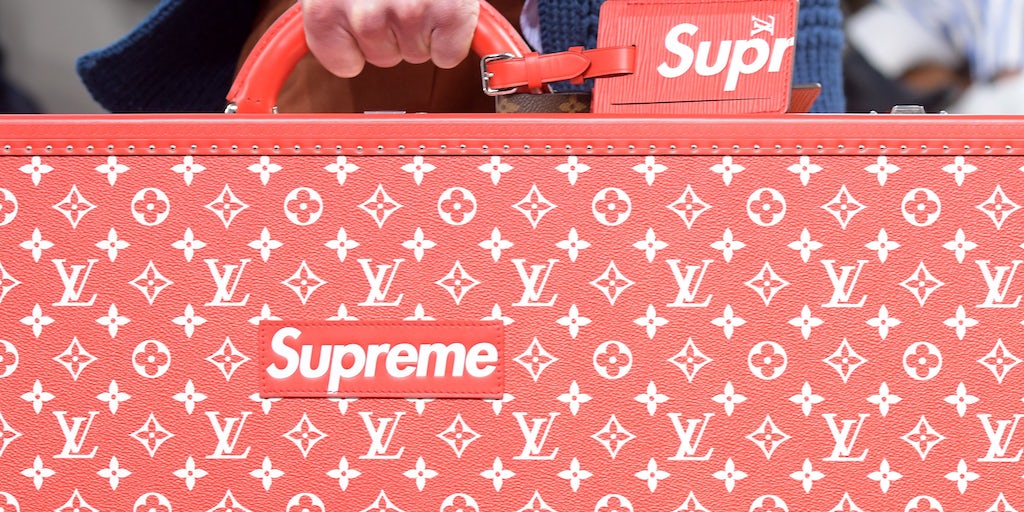 PARIS, France — Once a little skateboarding shop in New York, Supreme has become an international luxury phenomenon. Its red-and-white box logo has become one of the most coveted symbols in fashion, whether it’s on the front of a plain white T-shirt or emblazoned on the side of a miniature motorbike. In fact, some argue that Supreme’s success calls for a widespread return of logo fashion in general.

The label proved its power on Wednesday at an auction in Paris titled C.R.E.A.M. (Cash Rules Everything Around Me), after the Wu-Tang Clan’s 1993 single, totalling €850,681 ($1 million) in sales. The 145 lots had price estimates ranging from €200 to €100,000, allowing collectors to grab rare items they may have missed the first time around. Supreme has retained its shine by keeping its products ruthlessly exclusive. Collections are all limited-edition and released in occasional “drops,” leading to snaking lines whenever new items hit store shelves. Streetwear lovers bought into the hype.

So did investors. In 2017, the Carlyle Group, one of the world’s largest private equity firms, bought a 50 percent stake in Supreme for $500 million, valuing the company at $1 billion. With the hefty cash injection, Supreme now has its sights set on expansion abroad in an effort to became a more global luxury label.

French auction house Artcurial held the event at its Paris headquarters and simultaneously online, via its website. Fabien Naudan, the house’s vice chairman, spent three years gathering the Supreme pieces from various private collections for the auction, which was themed after New York street culture. Some non-Supreme items were mixed in, such as sculptures by street artist Kaws and prints from Todd James. Naudan plans to hold a series of auctions in other cities, dedicated to the unique undergrounds of each.

Founded by James Jebbia in 1994, Supreme is notorious for its willingness to put its name on all sorts of strange things (it once sold a Supreme brick; yes, a brick), so there were plenty of decorative oddities on which to bid. Final totals doubled the global pre-sale estimate with 94 percent of lots sold.

A punching bag, made in collaboration with boxing brand Everlast, went for €20,150, including the 30 percent buyer’s premium. A pair of boxing gloves sold for €8,450. Other Supreme collaborations at the auction included a Fender Stratocaster guitar (€5,200), a Coleman chair (€3,250), and a pocketknife from Buck Knives (€2,080). A three-foot by one-foot painted sign sold for €54,600 euros, a baffling eight times more than its €7,000 high estimate.

The biggest-ticket items were a pair of signature Louis Vuitton x Supreme trunks. The French fashion house considered its partnership with Supreme so significant that it included the collaboration alongside historic pieces from the past century and a half at its limited-run exhibition in Manhattan late last year. One trunk sold for €88,400; the other, a smaller version for skateboards, was snapped up for €62,400.

Arcturial reps described the crowd as “very young and urban” and mostly brand new to auction experience. Reached after the sale, Naudan characterised the excitement from this “new generation of collectors” as evidence of a new cultural moment.

“The prices obtained for both Supreme branded objects, but also the works of artists from the same generation who accompanied this unprecedented global movement, confirm the international interest in urban culture,” he said.