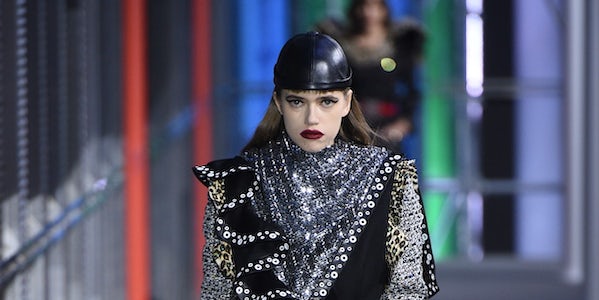 PARIS, France — “I am happy to be misunderstood,” Nicolas Ghesquière said cheerfully after his new show for Louis Vuitton on Tuesday night. His good humour suggested he’s grown used to the divergence of opinion that swirls around his tenure at Vuitton. The set for his new presentation suggested that he may, in fact, even court it.

In an act of surreal excess, Ghesquière recreated the exterior of one museum (the Centre Pompidou) in the interior of another (the Louvre). Even the late master showman Karl Lagerfeld could scarcely conceive of anything so outlandishly extravagant. But there was a fiendish method in Ghesquière ‘s madness. The radical look of the Centre Pompidou, popularly known as Beaubourg, sparked a furore when it opened in 1977. Ghesquière called it “the beauty of controversy.” The appeal of such a notion was obvious to him. “Sometimes, we’re excited to discover shapes that seem new,” he said, “Sometimes, they’re controversial. It takes time to understand things. Beaubourg was criticized at the time, then it became something so important for the culture. Our eyes got used to it. We evolve.”

Was Ghesquière subliminally referring to the reaction to his own designs as well? He insisted that his co-opting of Beaubourg was actually a reflection of his fascination with the street culture that grew up round the museum and its piazza. “The story of the collection is sitting in the Quartier Beaubourg and watching the people, instead of looking at my phone,” he said. Street performers, goths, ex-punks, your run of the mill urban eccentrics – these were some of the characters he listed as influences. And also the clientele of the Café Beaubourg and the Café Costes, two iconic rendezvous for the Parisian jeunesse dorée of the 1980s.

That may have been the most telling reference. Since the very beginning of his career at Balenciaga, Ghesquière has channeled the 80s, in all their polarizing tackiness and techno chic. This collection trawled both tack and techno, with “Back to Life” and “Paid in Full” in the background. The New Waviness of flippy little skirts and a sci-fi shoulder, or a leather mini with a skinny black tie. The studded biker boots and thick-soled creepers, footwear for females who please themselves. The pleated, puff-sleeved florals, echoes of the women who, said Ghesquière, “never let go of craft.” Picture “Flash Gordon” meeting “Little House on the Prairie.” No styling, Ghesquière insisted. Just simple self-expression. And if you didn’t get it, he insisted, you didn’t recognize the codes of dress of the various tribes of Beaubourg.

That’s valid enough. The Internet is alive with assholes who live to stigmatize and abuse anyone “other” to themselves. One could only have wished that Ghesquière had paid more due to his various inspirations. As much as he insisted on the value of diversity, there was a curious, dulling uniformity in his march-past of models, so many of them wearing black leather skullcaps. But maybe I am as happy to misunderstand as he is happy to be misunderstood.