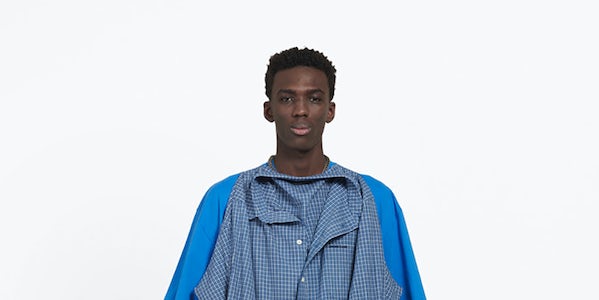 PARIS, France — Ah, Balenciaga: at it again. Pushing all those social media buttons and getting everyone het up to such an extent that they have just become complicit in making an item in the men’s collection a veritable phenomenon simply on the back of an Instagram post.

When will we stop swallowing the bait? One moment there’s a picture online, and the next it has spawned 1,000 memes — all of which lead back to the source, and all of which play right into the hands of the very canny designer Demna Gvasalia.

He understands as well as anyone how to ride the hype cycle and bend the free-floating and often indiscriminate desire of the digisphere to use fashion as target practice to his own advantage.

I am speaking, of course, of the T-shirt shirt, a menswear product from the Balenciaga Fall 2018 collection that is exactly what it sounds like: a cotton T-shirt twinned to a cotton button-up shirt in complementary colours that can be worn with the long-sleeved shirt draped on the front, or the T-shirt draped off the back.

It costs $1,290 and is currently available to order. It’s not quite two-for-one, but close. It’s in the same family as the Double Shirt (a short-sleeved button version with the long-sleeved one that costs $1,490) and has a sibling in the spring women’s collection (a version that costs $1,690 is sold out at the Balenciaga store online), though no one seems to have registered any outrage about that one yet.

In collection context, the T-shirt shirt could be seen as smart, pointed commentary on our conflicted relationship with the whole idea of smart casual dressing and obsession with becoming the next Mark Zuckerberg by shedding the corporate uniform.

But on its own in various Instagram posts, with a young man looking serious and pouty while draped in multiple empty sleeves, it went viral on tides of self-amused commentary about fashion’s ridiculousness.

If I lazy about a halloween costume this year (very likely), I’m just going to be the Balenciaga t-shirt shirt.

File under: The rich are hanging in there,

Balenciaga is selling a shirt attached to a t-shirt.
For this bit of nonsense, you pay $1,300. pic.twitter.com/P6eIvDZYhg

The Twitterati had a field day! The Daily Mail weighed in! So did Perez Hilton. Fortune and CBS did stories. Those are just a few of the reactions, which have come from India, Mexico, Germany, Britain and Canada, among other places. Most of them could be summed up as: look at everyone freaking out about the crazy fashion types making weird stuff.

Get a grip, people. Who’s the sucker here?

Though Balenciaga declined to comment on the reactions, this is not the first time the brand has turned the potential of social media mockery over what is perceived as a silly product into a strategy.

It began just over a year ago, when a leather version of the classic Ikea Frakta shopper that cost $2,145, instead of the original’s 99 cents, sent the internet into a similar frenzy about apparent fashion excess — and then sold like hot cakes.

That may have been a fluke, but then came the embellished platform Crocs for $850, which again produced shock and horror online — and were sold out on some sites before they even arrived, thanks to the number of pre-orders engendered by all that chat. And now we have the T-shirt shirt.

Are you seeing the same pattern I am seeing? With both Balenciaga, where Mr. Gvasalia has been creative director since October 2015, and his own brand, Vetements, the designer has made something of an art form out of appropriating the basic clothing (or high fashion) common denominators that we have long taken for granted and twisting and torquing them into new forms that demand a rethink. Now he is doing exactly the same thing with our reactions.

By pretzeling ourselves with such gusto over his work, we are, in fact, simply converting what could be seen as a novelty item or a fashion experiment into a phenomenon. We are making it famous. And in doing so, we imbue it with social meaning and symbolism that gives it a life beyond clothing, making it into an artefact of its time. Maybe it was that already. (Fashion historians of the future can weigh in.) But now it definitely is.

The overreaction to the Balenciaga products has played right into the company’s hands, just as the Shock! Horror! at Vanity Fair’s 1991 cover of a naked and pregnant Demi Moore did a lot to transform that magazine’s August issue from an eye-catching moment in a normally dead month for newsstand sales into an endlessly discussed and debated sold-out publishing landmark.

It worked for Bret Easton Ellis, too: the breast-beating about his novel that same year, “American Psycho,” helped turn that book into a best seller and a film.

If popular reaction really is inclined to dismiss the T-shirt shirt as silliness, then “dismissal” should be the operative word. Otherwise, while the internet may be laughing, the brand will be laughing all the way to the bank.

By Vanessa Friedman. This article originally appeared in The New York Times and was legally licensed through the NewsCred publisher network.

The Hidden Links Between Cristóbal Balenciaga and Demna Gvasalia