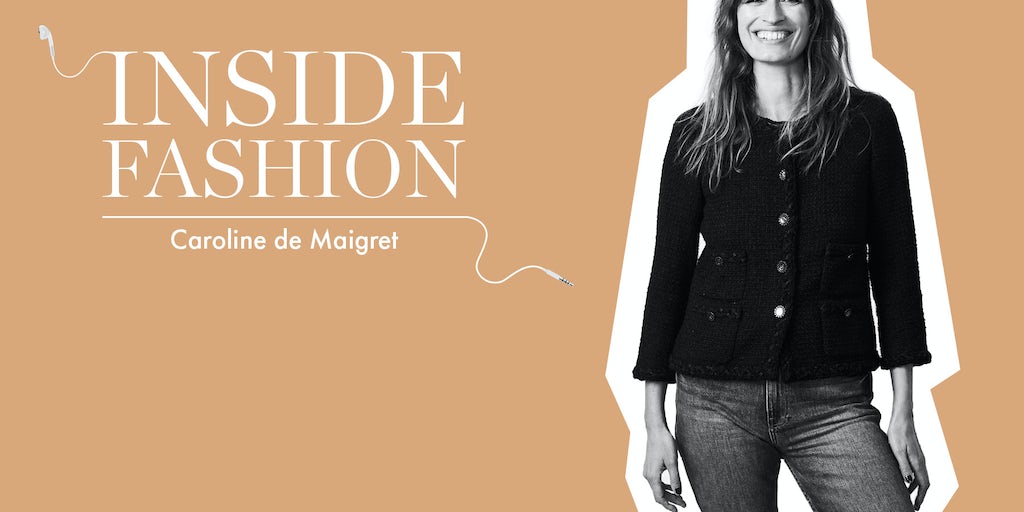 LONDON, United Kingdom — Caroline de Maigret’s signature tousled hair, minimal makeup and French-girl cool attitude have taught women around the world how to feel and look like a Parisian.

But the model, music producer and author, who can make a pair of jeans seem as sophisticated as a Chanel suit, hasn’t always felt confident with her look.

While studying modern literature at Sorbonne University in Paris in the ’90s, De Maigret never imagined venturing into the world of high fashion — let alone at 19. “I was so shocked, people were telling me in order to work I had to fix my face,” she said. “I was told my nose was too big and I had to fix it and that… I had to change aesthetically.”

De Maigret’s first major shoot was for British Vogue — a Godfather-inspired shoot in Palermo, Italy. She went on to walk in shows for major fashion houses including Louis Vuitton and Alexander McQueen. In 2016, she was made a Chanel ambassador by Karl Lagerfeld.

It was great for my career as well because it meant I was going to do the Chanel show.

“It was amazing for three weeks to [work] with Karl, who was so witty and so much fun. And it was great for my career as well because it meant I was going to do the Chanel show… It is the show you have to do when you want to be a model.”

De Maigret later took a step back from modelling full time to concentrate on a number of projects. “It is a weird thing to be passive, to wait for others to book you. It was fun for a while and I had the most amazing time.”

She moved back to France from New York to set up her own record label, Bonus Track Records, with her partner Yarol Poupaud. In 2011, they were nominated for a César (the French equivalent of the Oscars) for their work on the soundtrack of Bus Palladium.

De Maigret epitomises Parisienne chic and has been frequently featured in Vogue street style editorials, which brought her aesthetic to wider attention. Questions about her edgy take on French fashion led De Maigret to publish a collection of essays, “How to Be Parisian Wherever You Are: Love, Style and Bad Habits” (2014), which she co-wrote with journalist and screenwriter Audrey Diwan, writer Anne Berest and movie producer Sophie Mas. The book of witty anecdotes and fashion world tales quickly became a global bestseller and was translated into 32 languages.

De Maigret tackles a new topic in her latest book, “Older, But Better, But Older,” on the pros and cons of ageing, which she co-authored with Mas.

“It does change a few things, it’s great and I love the knowledge I’m getting from it [but]… magazines have a tendency to tell us how amazing [ageing] is and I was like, ‘that’s not how I feel, it’s not that cool.’”

Subscribe to BoF Professional for unlimited access to BoF articles, plus exclusive benefits for members. For a limited time, enjoy a 25 percent discount on the first year of an annual membership, exclusively for podcast listeners. Simply, click here, select the Annual Package and use code PODCASTPRO at the checkout.