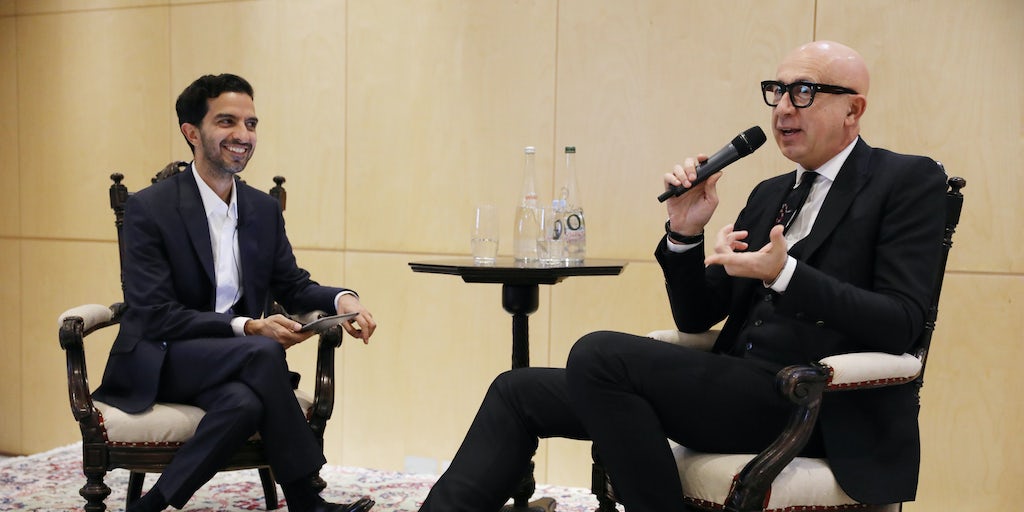 The reinvention of Gucci is a blockbuster success story. With growth rates close to 50 percent quarter on quarter — and surpassing €6 billion in sales for the first time in 2017 — the Florentine house continues to drive parent-company Kering‘s record-breaking growth.

Central to the company’s rebound is Marco Bizzarri, the seasoned executive that ushered in a new era at the megabrand when he took the reins in January 2015. One of the first strategic decisions Bizzarri made as chief executive was to appoint Alessandro Michele as creative director, who established a more contemporary attitude at Gucci that was met with immediate critical success.

But the aesthetic overhaul of the house was mirrored by an internal cultural transformation that places emphasis on passion and risk taking, “moving from a culture of fear to a culture of empowerment,” Bizzarri tells Imran Amed at an intimate talk hosted by the BFC Fashion Trust. “There is a change of aesthetic and a change of positioning in the company [which] came not from what we wanted to do, but why we wanted to do it.”

This hasn’t only impacted the brand’s approach to product: “Connection and engagement and interaction and the way in which we approach digital and approach social make the Gucci experience today,” he adds. “Our culture and our way of connecting people and being authentic and passionate and joyful is really speaking to a crowd that cannot grow enough growing forward.”

This philosophy was recently demonstrated last month when, following the mass shooting at Marjory Stoneman Douglas High School in Florida, Gucci joined the anti-gun movement by donating $500,000 to March For Our Lives — an unexpected move given how large companies rarely take a stance on political issues. For Bizzarri, however, the decision was easy; Gucci has experienced the tragic impact of gun violence, with two employees being among those shot at Orlando, Florida’s Pulse nightclub in June 2016. “Corporate neutrality is completely finished,” he added. “Today you need as a corporation and as a leader to take [a] stance.”

Listen to Bizzarri discuss his career path to Gucci’s helm, how he jumpstarted the company’s stellar success, and his approach to building a fashion business in today’s fraught, hyper-connected world.

Marco Bizzarri discussion with Imran Amed is part of a programme of talks organised by the BFC Fashion Trust, a charitable initiatives of British Fashion Council.

To contact The Business of Fashion with comments, questions, or speaker ideas please e-mail podcast@businessoffashion.com