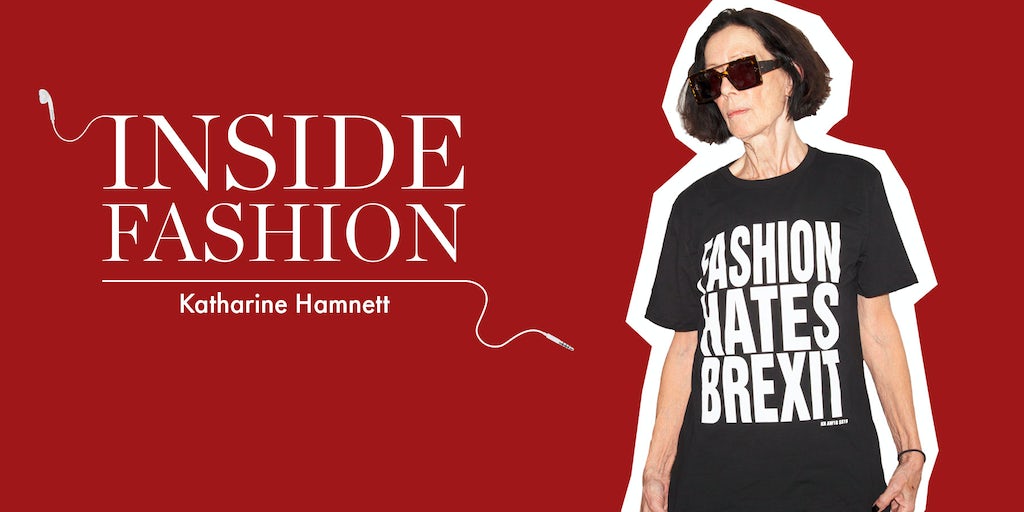 LONDON, United Kingdom — Political protest is hot in fashion right now. Dior, Missoni, Gucci and Prabal Gurung have all been getting in on the action in recent seasons. But there’s one designer that’s been unwaveringly challenging the status quo for decades — call her the original fashion activist.

British designer Katharine Hamnett pioneered the sustainability conversation in the fashion space, promoting human rights and environmental issues decades before the wider industry started taking notice by channelling activism through the clothes she created — or to put it in Hamnett’s words, “I just use and abuse the voice that clothes have given me really.”

In 1983 her provocative “Choose Life” slogan tee — promoting drug and suicide prevention — dropped. The call to action was endorsed by superstars, from Wham’s George Michael and Andrew Ridgeley to Queen’s Roger Taylor. “We were on a roll and we were getting so much publicity,” says Hamnett.

Hamnett’s slogan T-shirt crusade began with a conversation with PR guru Lynn Franks, who served as inspiration for British comedy series Absolutely Fabulous. Franks was putting on an exhibition to promote Buddist philosophy. Hamnett had other ideas.

“I said you’ve got to do it, huge letters on a T-shirt, people can read it from 200 yards, that’s how you get a message over, not this stingy exhibition you’re putting on,” recalls Hamnett. “That was the start. And then I realised there were also other things that needed screaming about.”

“Choose Life” was followed by more politically charged slogans: “58% Don’t Want Pershing.” “Worldwide Nuclear Ban Now.” “Use A Condom.” “Peace”. Her latest T-Shirt, “Cancel Brexit.”, is on sale now and aims to tackle one of the most pressing issues in British politics today head on.

Hamnett is campaigning for a second referendum.

Here’s how you can get involved:

Insert your signature and name