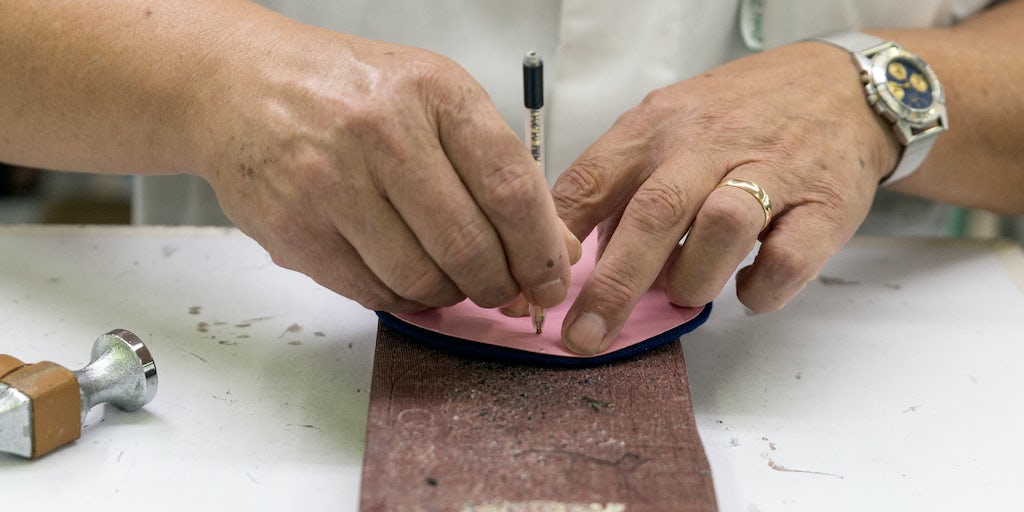 NEW YORK, United States —  Scandicci, a town outside Florence known for its leather workshops, has seen its fortunes rise along with Gucci, Prada and the other luxury brands that manufacture bags, shoes and belts here.

Now, as the luxury sector begins to truly reckon with the global economic fallout of the pandemic, Scandicci’s artisans have to hope their town is too big to fail.

“Everything starts in Scandicci,” said Sandro Fallani, the town’s mayor. “If Scandicci stops, the world stops.”

Like businesses across Italy, Scandicci’s factories were forced to shut down as Italy went into lockdown in mid-March, effectively pausing orders for luxury conglomerates around the world. Now, many are operating at limited capacity in order to comply with social-distancing guidelines, with workers staggering shifts or working in alternating teams. Fallani said he has been in talks with the luxury giants that operate large factories in town, and hopes they will continue to produce in the same quantities.

The romanticised ideal of artisans quietly working in small factories in the Italian countryside has propelled “Made in Italy” to the centre of the luxury supply chain, with the country holding a more-than 40 percent share of luxury goods production, according to McKinsey.

The reality on the ground is more complicated. The “Made in Italy” system relies on a complex, fragile network of independent businesses, big and small, often working in close coordination with manufacturers around the world. Change is coming, as luxury sales plunge, with the market set to contract by anywhere from 20 to 35 percent by the end of the year, according to Bain. Brands are looking to cut costs in their supply chains.

For years, family-owned Italian factories have been losing orders to cheaper, but highly skilled manufacturers overseas. That migration may simply speed up now.

Factories have slowly reopened, but with social distancing guidelines in place, many aren’t able to ramp up production to pre-pandemic standards. As orders are cancelled and government aid stalls, many are struggling to stay afloat.

Independent factories lack the deep pockets of the luxury brands they work with, and many will close if the economy doesn’t rebound quickly. Widespread factory closures could wreak havoc on Italy’s already distressed supply chain.

What’s happening now is a slap to the Italian fashion system.

What’s more, with limited capacity and cash flow, many factories aren’t in a position to invest in new technologies or experiment with e-commerce. And while some factories may be shut down permanently, Nicolelli believes many will be consolidated and acquired by investors or larger luxury brands like LVMH and Kering that are looking to expand their control post-pandemic.

Gucci recently announced a partnership with Italian banking group Intesa Sanpaolo introducing a range of loan programmes and financial tools for companies in its supply chain. Others may begin to further their investments in the independent factories and suppliers they rely on for goods and services without buying them outright.

Many independent companies that currently manufacture in Italy are doing everything they can to stay there: albeit with some adjustments. “It’s going to be a very tough season,” said Stefano Canali, president and chief executive of the family-owned menswear brand Canali. He said that he is committed to paying what he owes to factories and suppliers in order to secure their future. But he has also made some cost-saving changes, using digital tools to create virtual showrooms and accelerate sample and prototype productions for future seasons. “These innovations are here to stay,” he added.

Boston-based direct-to-consumer footwear brand M.Gemi works with several small family-owned factories in Italy, and over the years cut down production time and costs by using 3D technology and graphic design to render prototypes and adjust samples.

M.Gemi Co-Founder and Chief Executive Ben Fischman notes that it took time for factories to adopt these changes. “We had to work very closely with our suppliers and push them to embrace a new way of timing their supply chain,” he said.

It’s going to be a very tough season.

However, many believe that new technologies are antithetical to Italy’s craftsmanship, and could change the structure of the fashion system, rendering many of its smaller factories obsolete.

“[Using digital technology is unthinkable if you want to achieve a certain sartorial excellence,” said Marco Zanini, Milan-based independent designer and former creative director of Schiaparelli. Production and design in Italy is still a task that should be done “by hand, and together.”

Zanini said that the hectic pace of the fashion calendar is a bigger threat, and the industry would benefit from producing fewer collections at a slower pace.

Positioning for the Future

However, despite recent challenges, many believe Italy may be well-positioned for the growing demand of a different kind of fashion system. Independent factories and suppliers may become increasingly in demand as brands look for sustainable, ethically sourced materials and products in smaller quantities as the pandemic highlights inequalities in existing supply chains.

“Sustainability is at the centre of our strategy for the future,” said Carlo Capasa, president of Camera Nazionale della Moda Italiana. The organisation is currently working on rolling out new initiatives to support supply chains and factories as government aid stalls.

Some are optimistic that the shake-up will ultimately work in Italy’s favour. “Made in Italy will be even more important in the next few months,” said Canali. Manufacturing facilities based in Italy, he added, will be in an advantageous position as consumers become more considerate with their luxury purchases, potentially marking a return to the quiet luxury trend that followed the 2008 recession.

Simone Gronchi, a designer and agent that helps connect brands with shoe factories around Tuscany, believes that businesses looking to cut down the amount they produce and design each year will look to Italy instead of China or Bangladesh. “All the leather is here, all of our compounds are very close and our suppliers are very prepared,” he said.

After recent delays and disruptions due to the pandemic, brands are taking measures to localise their supply chains and move production out of China and closer to their headquarters and consumers. A recent McKinsey & Co. survey of sourcing executives found that roughly 60 percent of respondents expect manufacturing clusters to expand in Central America and Eastern Europe to be closer to consumers in Western Europe and the US.

Despite many factories and suppliers facing order cancellations anywhere from 30 to 50 percent, Gronchi remains confident that Italy’s supply chain will stay intact in the coming months. “We can even be part of the renaissance,” said Gronchi. “The restart of everything.”

How to Avoid the Next Supply Chain Shock

Where Should Fashion Brands Manufacture Now?