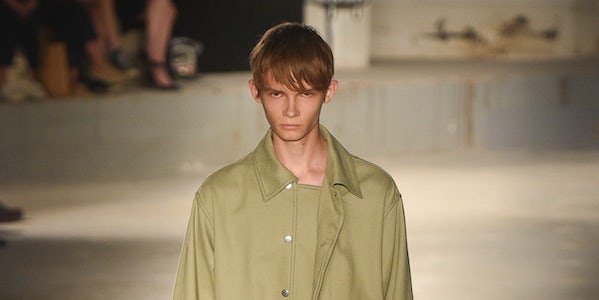 PARIS, France — Let’s put it bluntly: overcomplicating is pointless. Simplicity always gets straight to the point.

The Acne Studios show today, the first proper men’s catwalk show for the Swedish brand, was a smashing line up of crazy-hued pragmatic and straightforward pieces with a vague seawolf or world traveler thing to them. The sturdy outerwear and the suiting in fluorescent brights were a standout, as was the spongy and very synthetic looking knitwear lined with very crafty looking fringes. It made for some compelling clashes that managed to retain decisive wearability.

The concept upon which such clarity was based — playing with proportions and unexpected colours and fabrics — was instead rather complicated, or probably just intricately expressed. Jonny Johansson wanted in fact to challenge the definition of garments: talking of a pair of jeans while actually describing a t-shirt, for instance. What actually happened was a migration of details, or a morphing of two different garments into one. It worked. And expressed with a simpler concept, it would have worked even better.