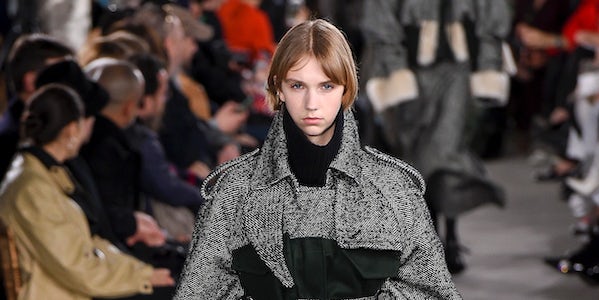 PARIS, France — If you consider that Chitose Abe grew up in Tokyo, her label Sacai’s umbilical connection to New York street culture of the 1980s might strike you as a thing of wonder. Loose Joints’ “Is It All Over My Face” bounced in and out of the soundtrack for her show on Monday. But to wonder at such a thing would be to forget how tireless Japan’s fashion community has been in its fetishistic absorption of the warp and woof of Western pop culture.

In Abe’s case, that has taken the form of a faith in the hybrid as a unifying principle, bringing together times, places, cultures in an idiosyncratic stew. It’s not a notion that is endlessly renewing. There have been times when a Sacai collection felt a little too much like more of the same. But not on Monday. The mood was darker, stronger, more aggressive…and more readable. When Abe collages her hybrids, they sometimes lose focus. Here, they were layered in strong new silhouettes, like the flare of a peplum matching the flare of an accompanying skirt. Or they were ingeniously embedded, the way a little puffa bolero disciplined a billowing trench, or an elasticated waistband was set into the back of a coat. Smaller pieces on top of bigger pieces – that was the guiding principle. Abe said it tracked back to the way she used to layer her own clothes. Hence a cabled sweater stretched over a parka. Layering inverted. It reads as an arbitrary fashion indulgence, but it didn’t look that way.

That’s always been the peculiar magic of Sacai, though it’s not a spell with infinite sustain. So it was heartening in a kind of bleak way to see the label going deeper, monochrome, militant. Abe acknowledged that Sacai is a somewhat abstract concept. That’s why the print of the season was a Jackson Pollock-like paint spew. Not an actual piece by Pollock, but the mess he left on the floor of his studio. Abstraction made concrete. Abe’s analogy was obvious. What is left when the art is finished? In her case, it was the most direct, convincing collection she has shown in a while.