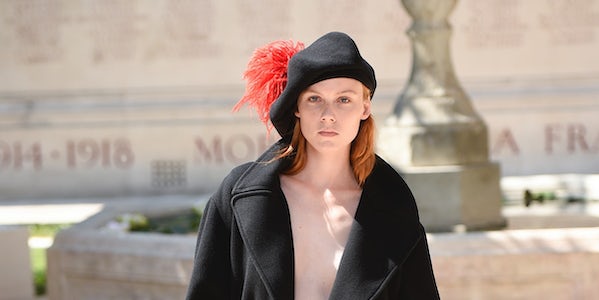 PARIS, France — Every so often, God smiles on fashion. On Sunday morning, Julie de Libran showed her L’Atelier collection for Sonia Rykiel in the courtyard of the Ecole des Beaux Arts. The weather complied. Frederic Sanchez chose the Velvet Underground’s “Sunday Morning” for the soundtrack, and the song’s strange, stinging sweetness was so perfect in context that you could feel critical faculties dissolving in the heat.

Which ultimately was neither here nor there, because de Libran mounted a fabulous display of classic Rykielisms, ticking box after box: sailor stripes, bias-cut jersey, pea coat, trench, mutant tuxedo, slinky lingerie and, always, the signature louche knitwear that defined a few generations of free-thinking Left Bankers. When the Chambre Syndicale, the governing body of French fashion, invited de Libran to celebrate the 50th anniversary of the Rykiel brand, she was at first a little intimidated. Then she realized that what she was being offered was time, a real luxury in fashion. So she took it. She called the result L’Atelier because it was, after all, the expertise of the design studio that helped her gloss the brand’s essence with something a little grander.

So that’s what happened. Sonia launched her business in May 1968. Paris was in an activist uproar, and she rode that wave. It’s the nature of historical cycles that last century’s radical becomes this century’s pillar of society, but de Libran managed to expertly embody Rykiel’s transition. The multicoloured knit that dissolved into a chaos of threads would be ’68. The hyper-restraint of a floor-length tuxedo dress with coq-trimmed sleeves could, for the enfeebled purposes of my then and now comparison, stand for the kind of look that might entrance a modern client. But there was so much more: the slouch of a sequined sweatshirt, the scaled-up man’s suit, the classic Sonia sweater given some added SHAZAM! And the clichéd couture closer, the wedding dress, shown as a corseted extravagance over jeans.

De Libran was supported by a wonderful model casting: Kirsten Owen, Malgosia Bela, Elise Crombez, Aymeline Valade. Faces! The seductive conviction of the whole presentation made you wish the designer could reinvent this situation for her tepid ready-to-wear shows.