This article appeared first in The State of Fashion 2019, an in-depth report on the global fashion industry, co-published by BoF and McKinsey & Company. To learn more and download a copy of the report, click here.

LONDON, United Kingdom — In last year’s State of Fashion report, we emphasised the importance of platforms as entry point of choice for consumers into their shopping journey. Their growing dominance through superior convenience, growing segment coverage and the launch of private labels continues to be a theme this year for both fashion pure players and multicategory platforms. For example, Amazon is on course to become the leading apparel retailer in the US, with over 8 percent estimated total share, and Flipkart has 40 percent share of online fashion sales in India., However, potential for profitable growth fuelled by user acquisition is starting to saturate due to market maturity and increased competition. The next horizon in platform evolution is business model diversification through proprietary technology and knowledge to enrich the offering to consumers and brands. The race is underway.

Evolution presents platforms with an opportunity to generate higher margins while growing scale, as opposed to the recent experience of fast growth without significant profitability. E-commerce players consistently post lower profits than their physical counterparts, with average EBITDA margins of -4 percent in 2017, compared with -8 percent at traditional retailers, according to the analysis from McKinsey’s Global Fashion Index. Three of sixteen publicly listed e-commerce players with revenues of more than $100 million made a loss. In one example, Yoox Net-a-Porter posted a profit margin of -5.2 percent in 2017 while growing at 35.6 percent year on year. A series of private e-commerce players are also operating unprofitably, with Farfetch (pre-IPO), for example, reporting an EBITDA margin of approximately -14 percent in 2017, despite significant revenue growth of 74 percent.

Smaller players will continue to have their role to play as long as they differentiate on emotion, curation and trust.

While investors in leading players have often shown patience for profitability, weak performance has been reflected in the valuations of some small to mid-sized private players. Fab.com, once valued at $900 million, was reportedly sold to PCH in 2015 for between $15 and 30 million. In 2018, Rue La La reportedly acquired Gilt Groupe for under $100 million, far below its one-time valuation of $1 billion.

In the context of such cautionary tales, large e-commerce players are strategically adding new services. They are venturing in areas where they have a competitive advantage, for example Farfetch and Zalando with white-labelling, or where they spot a structural opportunity, as in Alibaba’s XPressBees logistics company. They are also investing heavily in technology across the value chain, aiming to boost efficiency and streamline the customer experience. Alibaba’s expansion is effectively powering the digitisation of a country’s entire retail sector. This is reflected in investments in various payment solutions (Paytm, Kakaopay), logistics (XpressBees), and quantum computing cloud services (SenseTime). Among other recent initiatives, Flipkart’s AI for India initiative reflects its internal use of machine learning and other advanced technologies to monitor products and spending. The initiative aims to encourage data science and promises hundreds of millions of dollars of investment to build new AI solutions. In other examples of diversification, in 2016, Flipkart-owned Myntra acquired Cubeit, a mobile-based content aggregator, and in 2017 bought start-up InLogg, which brings together logistics vendors. 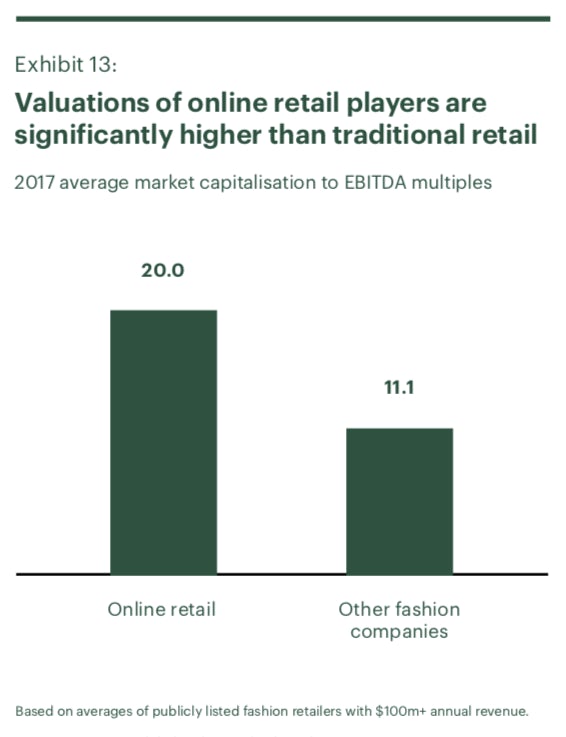 In Europe, Zalando is expanding marketing and fulfilment solutions, building out its partner programme, and has acquired AI start-ups. The company, which says it wants to become the “Spotify for fashion,” is focusing its strategy on four key areas — assortment, demand generation (for example, through localised merchandising and data driven marketing), digital experience and convenience. “We want to build that one destination which is the entry point for consumers and the most relevant platform for brands,” Zalando co-founder David Schneider told BoF in September. Non-core services are expected to contribute around 10 percent of Zalando profits in five years’ time, compared with 2 percent at present, and will add at least 250 basis points to EBIT margins in the long term, according to analyst reports.

Finally, Farfetch’s longstanding flagship example is its Black&White offering, an e-commerce white-label solution for luxury fashion brands. This allows Farfetch to leverage its technology capability beyond its core offering. More recently, the company launched its Dream Assembly technology accelerator in April 2018 and acquired Curiosity in July to expand its social media efforts in China. “One [area] that I find interesting — and we’ve made a move into this — is around conversational commerce and really thinking that customers are increasingly going to have a one-to-one relationship with their shopping through text message and through one-to-one requests,” says Farfetch chief strategy officer Stephanie Phair, referring to the company’s recent acquisition of a business called Fashion Concierge.

Some common threads tie these many initiatives together. Most major players have launched data and analytics offerings, the expansion of which is supported by the parent’s scale and ecosystems. The supply chain is a common area of focus for innovation, as is the payments process. In addition, many have bolstered their consumer proposition through expanded private-label offerings and content platforms to generate new profitable revenue streams. Most importantly, they signal a clear intention to become the platform of choice in an increasingly competitive segment.

Still, there is room for smaller players. Stitch Fix chief operating officer Mike Smith says, “smaller players will continue to have their role to play as long as they differentiate on emotion, curation and trust. Not everyone needs to fit the large platform business model based on logistics, speed and search.”

Looking ahead to 2019, we are likely to see an accelerated emergence of ecosystems of related and overlapping businesses. There will likely be an intensified race for pole position, with the largest players battling to become the go-to platform for consumers and brands. The “holy grail” of the industry will be integration of value-add services that remove friction in the consumer and supplier journey through effective use of data analytics at scale. This could lead to a continued wave of M&A activity in a race to find the best complementary offerings for existing platforms. There is also a rising chance of some kind of shake-out for vertical pure players, catalysed by reduced valuations and the failures of some smaller companies. Where generalist e-commerce platforms remain focused on retail margins rather than ancillary services, without occupying a niche, the demise is likely to come sooner rather than later.