In just 24 hours, the company was inundated by over a thousand CVs, with applicants ranging from former high-court judges and police officers to teachers and public servants — all of whom wanted to swap retirement for the world of fashion retail. Some were as young as 60; others had recently celebrated their 90th birthdays.

That the company is investing in the older market comes as no surprise — 30 million Taobao users are over 50, and last year Chinese people in that age group each spent an average of RMB 5,000 ($730) shopping online. However, what is unusual is that Alibaba decided to proactively employ people aged 60-plus to help appeal to this affluent market .

“A 60-year-old who has spent his or her life in fashion would certainly know better what their peers want over a 30-year-old,” said Caroline Burstein, co-founder of Molton Brown and ex-fashion director of Browns. “Older people have a wealth of experience and knowledge and can be among the best assets a business can have.”

In an attempt to lure in silver spenders and improve diversity on the catwalk, the fashion industry has finally recognised that it can no longer exclusively market clothes to the under-40s. Column inches and consultancy fees around the globe are now dedicated to exploring the underserved or untapped opportunities of the older market — a demographic that in many countries is now holding the consumer-spending purse strings.

Respecting your elders is good business

McKinsey & Company projects that in the US and UK, people aged 60 and older will drive 50 percent of consumer household spending growth over the next decade. This is largely due to the fact that having paid off their mortgages, they no longer need to spend a significant slice of their income on housing.

However, while brands are finally waking up to the power of the grey dollar, surprisingly few have looked into the potential knock-on effect it could have on their employment demographics.

In most developed countries around the globe, the late 20th century tradition of leaving the workforce at 60 to 65 has become both unfeasible and undesirable. Reasons for this include an increased divorce rate, a higher cost of living, fewer children to rely on and improved good health and high energy levels well into what was previously considered old age.

Yet there are more retirees than ever. The US Census Bureau shows that an American turns 65 every 13 seconds and that the number of domestic retirees will double between 2011 and 2030.

The high street is obsessed with price and youth and they pay a high price for that.

In Britain, 14.5 million people are expected to leave the workforce between 2012 and 2022, but only 7 million will enter it. And depending on how things evolve, some worry Brexit could make this gap even wider.

“For a number of structural factors, I see an increase in older fashion workers coming soon,” said Nobuko Kobayashi, a partner at A.T. Kearney in Japan, where half of all companies have been forced to raise retirement to accommodate the rapidly ageing population.

“There are overall labour shortages happening across industries, a glut of baby boomers reaching retirement age who still have the will to work and a fashion industry that is seriously targeting more seniors. That being said, I think it is a fairly new phenomenon in Japan. The fashion industry has always been notoriously young, specifying at times in the past that they would only employ twenty-somethings on the shop floor.”

Japan’s renowned department stores already cater to older consumers in a way that many Western retail spaces do not, providing rest areas and complimentary green tea, and deliberately choosing brands that appeal to all age ranges.

“There are plenty of people in their early sixties working both in customer-facing and behind-the-scenes roles, but they strongly tend to have been with the company since graduation,” said Samuel Thomas, a Tokyo-based consultant for department store Mitsukoshi. “[But] individuals rarely enter the Japanese workforce post-60 at the department store level.”

“That being said, often an older member of staff will become something of a celebrity within the store for their knowledge of their field,” he continues. “And in the context of an ageing society, they can relate to their older customers and understand a customer’s gradual shifts in taste over the years.”

In terms of business culture, Japan remains ahead of the global curve when it comes to putting seniors to work. One company that understands how to harness the power of older marketing is cosmetics maker Pola, whose sales team includes a woman who recently turned 100. Nationwide, Pola has 50,000 representatives selling their beauty products — of these employees, an estimated 5,500 are in their seventies, 2,500 are in their eighties and 250 in their nineties.

Their effectiveness lies in their ability to market products to their peers, who in Japan now spend more on beauty than most other age groups, according to BMI Research. Given the success this model has had in Asia, a similar picture should be emerging in Europe and America. So why are brands not yet following their lead?

Exposing the false economy of youth

Walmart is a still an outlier among retailers when it comes to hiring retirees. The Walmart greeter has had an iconic place in American business since it was first dreamed up in the 1980s as an innovative way to harness economic value from seniors in need of income, and today people as old as 90 still work for the company.

However, despite the fact that Western companies in other sectors like banking and transport have recently started proactively employing people of 60-plus, few retail brands have moved beyond using greeters or, in the case of many high-fashion labels, grey-haired models in major ad campaigns. 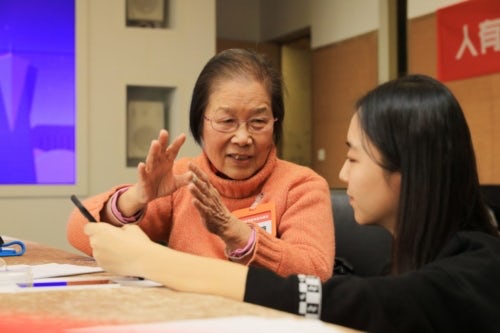 “I’m encouraged to see the recent shift in the use of older models in fashion marketing content,” said Debra Bourne, the co-founder of equality initiative, All Walks Beyond the Catwalk. “However, for diversity to be truly embraced, we need it to be from the boardroom to the retail floor…I’d love to see fashion teams of trans-generational co-creativity in every area of our business.”

In the UK, employment rates for people over 50 have been rising for two decades and have grown more sharply than for other age group since the financial crisis. However, a number of factors are still inhibiting the fashion industry from fully partaking in this trend.

Fashion’s employment methods are generally still geared towards attracting youthful recruits, particularly when it comes to remuneration and flexible hours. People with experience will understandably demand a higher salary than those starting out, and often a shorter working week. Many fashion companies are not prepared to make concessions on either front. But some believe that overusing cheap young labour is a false economy.

“As a university professor I visit a lot of brands and generally see a sea of young people in their early twenties — and I think it’s entirely down to cost,” said David Backhouse, the head of fashion at the University of Leeds. “These days, social media has taken precedence over design and companies also employ young people to feed that online hype.”

“But I think the focus has shifted too far towards the online community and away from high-quality design,” he added. “The production process is dying out, and many companies would seriously benefit from a having a few older employees with a bank of knowledge on how to actually make clothes.”

In order to woo this age group, the industry will also have to undergo a profound change in the way it represents itself. Fashion understandably appeals to a young demographic who are more likely to use clothes as a way of experimenting with their identity than their older peers. However, the industry’s laser focus on youth can feel ostracising.

Ageism in an era of AI and automation

“The high street is obsessed with price and youth and they pay a high price for that,” said Phyllis Walters, a retired fashion PR and consultant whose agency once worked with Versace, Joseph and Nicole Farhi, among many others. “I believe the boards of many high street brands urgently need to have more women of a certain age with a significant say, who can explain what does or doesn’t appeal to their age group.”

“The problem with age in our industry is that even if you think you’re relevant, 20-year-olds think you’re a dinosaur,” she continued. “I would certainly be open to returning to consultancy work if I was well paid and people were prepared to listen, but I would need to have the respect of the buying team to make any sort of difference. I worked in Italy for many years and over there you have a much bigger mix of ages than you do in Britain.”

In the UK, the Equalities Act has made it unlawful to advertise employment to a specific age group, but even taking this into account, few recruitment agencies are seeing any uptick in retailers seeking older employees. Equally, they are not seeing many 60-plus job-seekers hoping to get into the world of fashion.

“More over-60s are applying for work than ever before, particularly in the part-time sector, but just not in retail,” says Peter Knight of Forties People, the UK’s biggest mature recruitment agency. “I think there is still very much a perception that fashion is for young people — companies put out adverts describing themselves as ‘young and dynamic’ and that puts off anyone over the age of 40.”

It is certainly true that there are serious challenges ahead for the fashion industry, such as the impact of AI on its existing workforce, and there are legitimate concerns about skills gaps among older workers in an age of rapid technological development. And in countries like Spain, Greece and South Africa, where youth unemployment is high, hiring more older workers may be a bitter pill for some to swallow.

But ultimately, Western fashion players will probably need to follow the path currently being taken by China and Japan if they want to appeal to an increasingly affluent, vocal and powerful demographic, transfer knowledge to the new generation and play their part in addressing the toll that mass retirement and stricter immigration policies may soon have on an ageing society.

Whether it is down to unconscious bias, lazy recruitment strategies or penny-wise, pound-foolish budgets, HR departments that over-focus on youth are not moving in the right direction. Some insiders believe that having a more age-inclusive environment and workforce is an inevitability, and that the companies that are quicker to adapt will simply enjoy a competitive advantage for longer.

“What people sometimes forget is that fashion is a language,” says Walters. “If you understand it, you don’t suddenly stop speaking it when you hit 60.”

Meet Fashion’s Next Generation: Over 60s

Why Brooks Brothers Is Investing in Veteran Tailors