NEW YORK, United States — Tommy Hilfiger had the final night of February’s Milan Fashion Week all to himself. Inside the city’s Congressi fairgrounds, the designer’s latest big-budget extravaganza sent models down a racetrack-themed runway in colour-blocked leather pants and crop tops. Nearby, equally eye-catching “mechanics” in helmets and uniforms worked on Formula One cars in makeshift pit crews.

It was the fourth and final collection co-designed by model-of-the-moment Gigi Hadid in a lucrative partnership that started in the fall of 2016. Like the previous three collections, all of the clothes shown in Milan were instantly available as part of Tommy Now, the company’s “see now, buy now” initiative, which erases the standard six-month wait between the runway and retail and allows for something rare: instant gratification.

As soon as the show began, savvy shoppers could order $130 sweatshirts or a $460 pair of sheer overalls through the label’s website, its social media accounts, the event livestream, and TommyNow Snap, an image-recognition app. Elsewhere, artificial-intelligence-powered chatbots used Facebook Messenger to act as virtual stylists for thousands of customers. There was a buzz of interest on every platform, a far cry from the year 2000, when the brand’s stock plunged 75 percent in a single quarter.

Avery Baker remembers that year well. In an airy conference room in the company’s New York offices, Hilfiger’s longtime lieutenant is eager to take a victory lap. She’s dressed in a navy blue silk Tommy pyjama-style one-piece paired with a gold choker. Her tall frame, tousled blond locks, and all-American good looks make it easy to imagine her on a runway. But she’s Tommy’s chief brand officer, a title created for her to reflect the far-reaching influence she has inside the company. 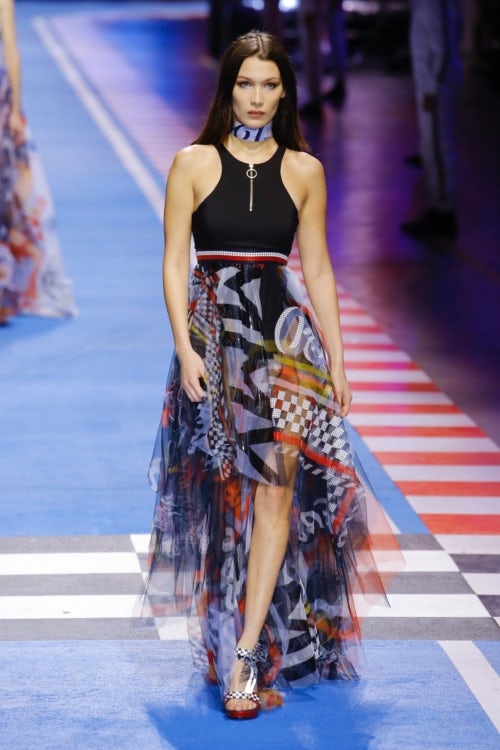 She directed the launch of Tommy Now in February 2016 — “My baby,” she calls it — around the same time Burberry Group, Ralph Lauren, Michael Kors Holdings, Tom Ford International, and other brands were testing similar strategies. “We looked around and said, ‘This industry is changing, the consumer is changing. If we don’t get somehow in front of that we’re going to get left behind,’ ” Baker says.

Two years later, no brand on the scale of Tommy Hilfiger — it’s a $6.6 billion business with 17,000 employees — is embracing fashion immediacy with such gusto. Michael Kors and Tom Ford dropped their efforts within a year. Traditional brands from LVMH Moët Hennessy Louis Vuitton SE and Kering SA have been skeptical, if not openly hostile, to the idea. Meanwhile, Tommy Hilfiger has gone all-in on the live experience, overhauling production and supply chains to do so.

The brand has created big-budget runway affairs such as “Tommy Pier” at the South Street Seaport in New York, which included tattoo artists and a Ferris wheel; “Tommyland,” in Los Angeles, which staged a show on the Venice Beach boardwalk at an estimated cost of $7 million; and “Rock Circus,” a concert at London’s Roundhouse, a venue that’s hosted the likes of the Beatles and Jimi Hendrix.

These kinds of ventures are typically measured in engagement, and by that criterion, Tommy Now can be considered a success. According to Baker, users spend an average of five minutes per session on the app, and 87 percent use it again. Social media impressions across Instagram, Facebook, and Twitter hit 2.6 billion in 2017, up 100 percent from the previous year; on the day of the Milan show, more than 65 percent of visitors to the website were there for the first time.

Any causality between engagement and sales is difficult to establish, but the company reported $1 billion in revenue for the third quarter of 2017, up 10 percent from a year earlier. “If just one way of leveraging technology works, trying all of them is worth it,” says Marc Beckman, the chief executive officer of advertising agencyDMA United. “They really do take risks.”

More than any data, these efforts point toward Tommy Hilfiger as a company that’s looking to the future. The past decade hasn’t been kind to Ralph Lauren, J.Crew, Gap, and other purveyors of American nostalgia. Tommy Hilfiger, though, is “an impressive story,” says Michael Dart, a partner at the management consulting firm A.T. Kearney and author of Retail’s Seismic Shift. “Other American heritage brands have lost some of their identity. Tommy’s success doesn’t feel like a bubble.”

Baker joined the company in 1998, at the height of Tommy mania. In the 1990s, the graphic, colourful, slouchy-meets-sporty look was adopted by preppy teenagers in Connecticut as well as Compton, Calif.-raised Snoop Dogg. Baker was a recent graduate from Northwestern University and had spent a year in Taipei working as a bartender, an English teacher, and an aid to Annette Lu, who went on to become the vice president of Taiwan.

Her first gig at Tommy Hilfiger was overseeing advertising for the kids’ clothing department, and it came with perks. The Backstreet Boys performed at her first office Christmas party. The first shoot she went on was with Britney Spears, whom the brand signed a week before … Baby One More Time launched her to stardom. “All of my friends were calling saying, ‘I can’t believe you got a job at Tommy Hilfiger!’ ” Baker says.

By 2000 the good times were over, as the brand became diluted and overextended. “You can’t grab the hip-hop kids, the white suburban kids, the middle-aged trendoids, and the celebrity Oscar crowd all at the same time,” Haysun Hahn, then-director of trend forecasting group Futuremode Inc., told the Los Angeles Times that year. In 2006 private equity firm Apax Partners LP bought the company for $1.6 billion with Hilfiger staying on as principal designer.

But within the brand, Baker’s own stock was soaring. A Philadelphia native, she moved to Amsterdam and is based at the company’s headquarters there. As Hilfiger’s North American presence shrivelled, she helped reposition it abroad, eventually turning the brand known for its red, white, and blue into a European powerhouse. Today, more than 50 percent of sales come from overseas. In 2010, Apax flipped the fashion house to Phillips-Van Heusen Corp. for $3 billion, almost twice what it had paid. “Avery was part of the core team who really got it right between 2005 and 2010,” says a source familiar with the deal who asked not to be named.

As ’90s nostalgia sweeps the fashion world, Tommy Hilfiger is capitalising on its rich archives.

Hilfiger is even more effusive. “I consider Avery to be an incredibly strong, perceptive leader and a trusted adviser,” he says. “She has taken [PVH Corp. CEO] Daniel Grieder’s vision of innovation and integrated it into every part of our marketing campaigns, attracting a new generation of fans to the brand.” After the sale to PVH, Baker kept rising in the ranks, overseeing initiatives such as “Meet the Hilfigers,” an ad campaign for the brand’s 25th anniversary that featured an eccentric, multiracial “all-American family.”

The label has a particular cachet among pop-culture-savvy millennials in Europe, especially former East bloc countries. In January the buzzed-about line Vetements from the Georgian native Demna Gvasalia collaborated with Tommy Hilfiger on a $1,040 oversize hoodie that mashed up both brands’ embroidered logos. Gvasalia, also the newly installed creative director at Balenciaga, was the one who approached Tommy Hilfiger, Baker says. “He wore Tommy in his youth, and there’s something about it that continues to resonate.”

As ’90s nostalgia sweeps the fashion world, Baker is capitalising on the brand’s rich archives. Current designs such as baggy crewneck sweatshirts provide a more grownup take on the label’s flag motifs and hearken back to the days when both TLC and Kate Moss wore them. She also revived the Tommy Jeans logo collection that was so popular in the ’90s.

Likewise, logo-printed waistbands have made a comeback on blogs and street-style tastemakers, and those motifs have been integrated into new designs. There is still much ground to gain, though — Gucci has ridden a wave of nostalgia to 40 percent annual growth. “Tommy has now pulled beyond being a complicated figure to being a positive figure while remaining relevant,” says Patricia Mears, the deputy director of the museum at the Fashion Institute of Technology. “He’s a new discovery for young people but is attracting older consumers who remember the brand in a positive way.”

The lessons of the early 2000s are still fresh, though. “Had I not gone through that experience, I might be making different decisions than I’m making now as the resurgence happens,” Baker says. With Hilfiger and Grieder, she identified Hadid as the new face of the brand and brought her — and, potentially, her 38.6 million social media followers — onboard the Tommy train. “That was a very smart move,” Mears says. Hadid is “part of that California culture and can bring the coasts together while still being seen as American even though fashion is so global today.”

Tommy Hilfiger’s most recent partnership, announced in February, will keep things turning in high gear — literally. The brand will sponsor the Formula One Mercedes-Benz team for the 2018 season, decking out world champion Lewis Hamilton when he hits the real racetrack in March. “Tommy’s favourite quote is, ‘I can either say hallelujah or now what,’ ” Baker says. “The big question after February is ‘What now?’ ”