SYDNEY, Australia — It was the last night of fashion week. A flurry of sakura petals came raining down on the runway, while Japanese performer Yumi Umiumare danced to the urgent rhythms of koto and taiko drums, positioned under a great cherry tree blossom. Last week’s Mercedes Benz Fashion Week Australia resort event was certainly a surprise to some of the international buyers who travelled up to 24 hours to get to Sydney.

Few were expecting an extravaganza like this from Camilla, which at 15 years old, is practically a heritage brand by antipodean standards. But Camilla’s Japanese theme wasn’t the only sign of Australia’s increasingly cosmopolitan approach to the fashion business. The brand is emblematic of a much wider internationalisation gripping the local industry — and the retail fault lines that are emerging as a result.

Like many Australian luxury brands, Camilla was first stocked by one of the country’s heritage department stores at a simpler time when upmarket players like David Jones and Myer would duke it out for consumers and brands alike, making the stores’ rival buyers the most important merchants in the market. But a glance at today’s front row at Camilla’s latest runway reveals a very different group of power players occupying the best seats, from international bricks-and-mortar peers like Saks Fifth Avenue and Selfridges to “online invaders” Net-a-Porter and MatchesFashion.

The department store issue is a big deal — it’s been at a low point for a really long time.

It’s a similar story at 11 year-old Sydney label Romance Was Born. “When we first started the business, majority of our wholesalers were made up of multi-brand Australian storefront retailers,” says Anna Plunkett, who designs with partner Luke Sales. “Now, that number is sitting at less than half. The introduction of international e-commerce sites definitely changed the game and opened our market.”

The online invaders made a big impression on industry leaders at last week’s designer showcase. “I have seen more serious buyers at this fashion week than ever before,” said Edwina McCann, editor-in-chief of Vogue Australia, over the phone during the final days of Mercedes Benz Fashion Week Australia (MBFWA).

Held against the industrial backdrop of Sydney’s Carriageworks, international buyer attendance to MBFWA rose by 51 percent in 2017, a trend which continued this year. However, a deeper look inside the country’s retail market reveals a different story — one of a desperate battle between the old guard and new.

Facing a battle within a battle

The latest wave of disruption in Australia comes at an already challenging time for retailers across the world and across all value segments. Growth in Australian retail sales slowed to 0.2 percent quarter-on-quarter in the first three months of 2018, against a 0.8 percent increase in the previous quarter, according to a recent Financial Times report.

Heritage department stores Myer and David Jones, brick and mortar giants that were once top stockists for local and international brands alike, are in a tailspin. Meanwhile, global brands across every category — from fast fashion to luxury — are seizing opportunities in the fast developing market, causing pricing wars that rattle domestic retailers.

It is a turbulent period as established Australian brands rethink their domestic and international wholesale strategies, while emerging labels are taking an entirely different approach to their predecessors. As e-commerce opportunities far outstrip those in traditional retail and direct-to-consumer strategies evolve, is there any way back for the country’s department stores?

At 180 and 118 years-old respectively, David Jones and Myer are Australia’s answer to Barneys New York or Selfridges. Collectively, the giants have over 100 stores country-wide and, for years, they have been considered one-stop retail destinations in major cities and rural towns alike.

“It’s a reflection of our community — it’s important to have a department store that’s good enough to represent brands and seen to be turning a profit… it’s [our] heritage,” explains Galambos, founder and director of Parlour X, a luxury boutique selling everything from Balenciaga to Valentino from its converted space in a 100 year-old church in the heart of Paddington, Sydney. “[They’re] a part of everybody’s childhood,” 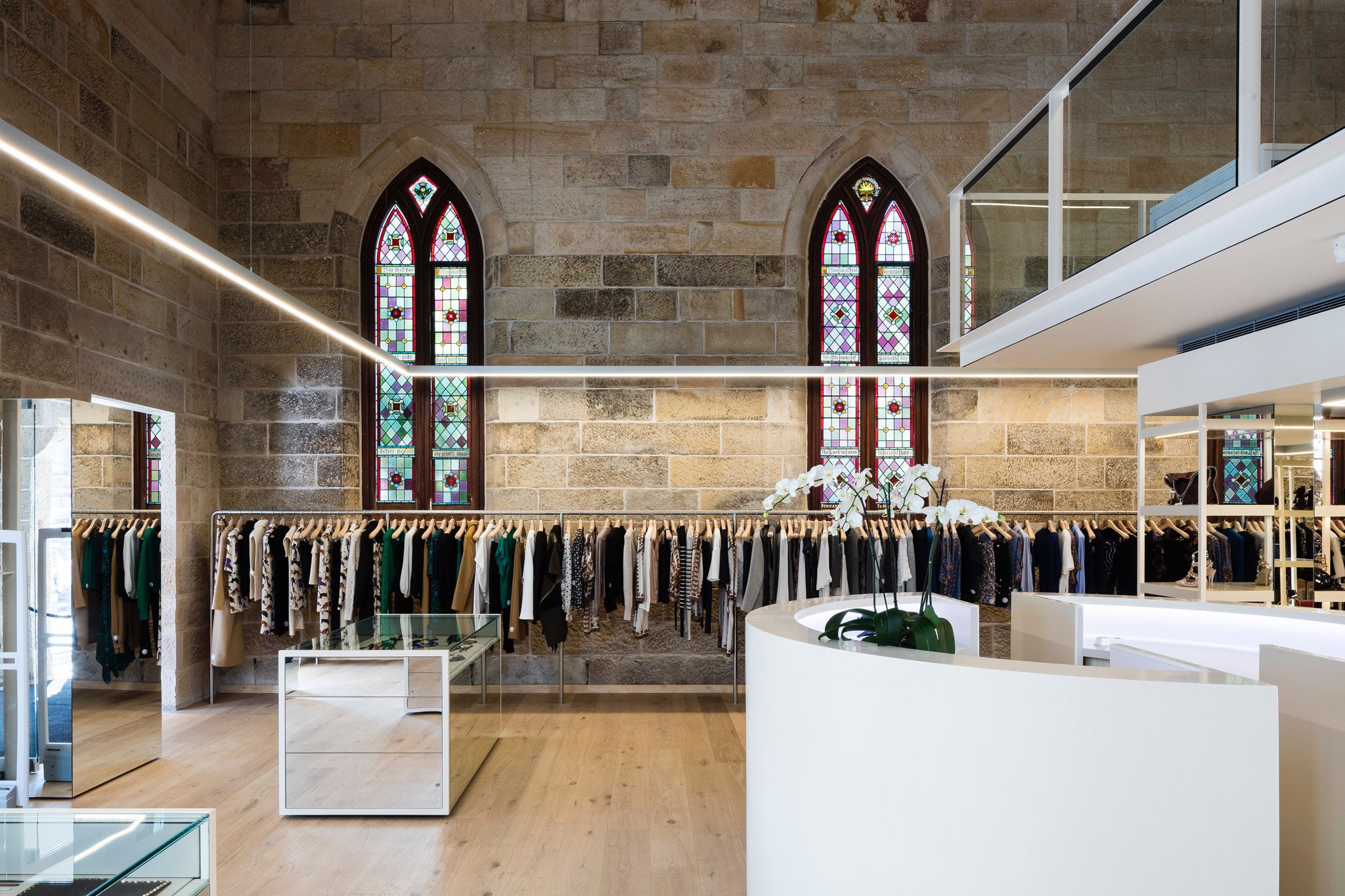 “The department store issue is a big deal — it’s been at a low point for a really long time,” says Galambos. “If we didn’t have [these] department stores, what would they say about Australia? We would suddenly be considered backwards from an international perspective.”

Over the last decade, the rivals have faced their fair share of challenges, including multiple management shake-ups, steadily declining foot traffic and online competition which sent revenue and market value tumbling. In January, the former’s South African owner Woolworths slashed David Jones value by more than A$700 million ($530 million), while Myer posted A$476 million ($361 million) in losses in the first half of this year.

Recently, talk of a merger between the two giants has resurfaced as one possible solution. Myer shares surged 7.2 percent last month when a prominent Australian newspaper mooted the recurring rumour.

“We have a market that is under pressure for low prices and online overseas [competition,]” says Russell Zimmermann, executive director of the Australian Retailers Association. “There’s a number of things that department stores need to do and are in the process of doing, [but] retailers across the board need to do some navel gazing.” Both Myer and David Jones declined to comment for this story.

For fast-fashion players like Zara, H&M, Uniqlo and ASOS, Australia presents room for expansion in a low-risk environment. “Overall, Australia has a stable government, low unemployment and opportunities for retailers,” says Zimmermann.

Up until July this year, when the law will change, goods purchased from overseas e-commerce platforms will be tax-free, under A$1000 ($750). As a result, price wars will ensue. “[International retailers] are offering a much lower price point and we’re seeing retailers react by dropping their price points,” he explains.

They’re undercutting recommended retail price during periods where they’re not supposed to.

It’s not just fast fashion — the presence of luxury e-commerce giants like Net-a-Porter and MatchesFashion is being felt by high end multi-brands like Parlour X. “They’re undercutting recommended retail price during periods where they’re not supposed to,” says Galambos. “That might work for the middle market and the lower market, but that’s never been the luxury model — it demoralises and destandardises the very concept of what is supposed to be luxury.”

For local brands, the allure of the department store is wearing thin — a problem facing department stores the world over. Instead, international expansion has become the priority.

“[In Australia,] the market is naturally smaller,” says eponymous designer Alice McCall, who, as well as having 13 of her own retail doors, has stocked with David Jones since launching 15 years ago. “Obviously there is much more growth internationally for the brand. There’s talk about international retail spaces — probably America first — and we will be showing in New York in September,” she says. Alice McCall currently counts Moda Operandi, Net-a-Porter and Farfetch as international stockists.

While Net-a-Porter has been operating in the country since 2001, MatchesFashion began delivering to Australia in 2012, followed by Farfetch, MyTheresa and more recently 24 Sèvres. At the other end of the market, Amazon and Alibaba arrived in 2017 and JD.com is expected to follow soon, according to Deloitte. Only 15 percent of the top 250 global retailers currently operate in Australia, leaving plenty of room for growth, says the firm.

Only a year-old, It-Girl brand I.AM.GIA has very few stockists in Australia. “We’re predominantly international,” says Alana Pallister, co-founder of the label, which exploded after being worn by the likes of Kaia Gerber and Bella Hadid. With stockists including Barneys New York, Saks Fifth Avenue and Revolve, wholesale now accounts for 60 percent of the brand’s international business, while that number sits at around 20 percent in Australia.

“Being such a big social media brand, we align with the online space and align ourselves with companies that are tech savvy and fast moving, rather than slow paced traditional businesses,” she says. 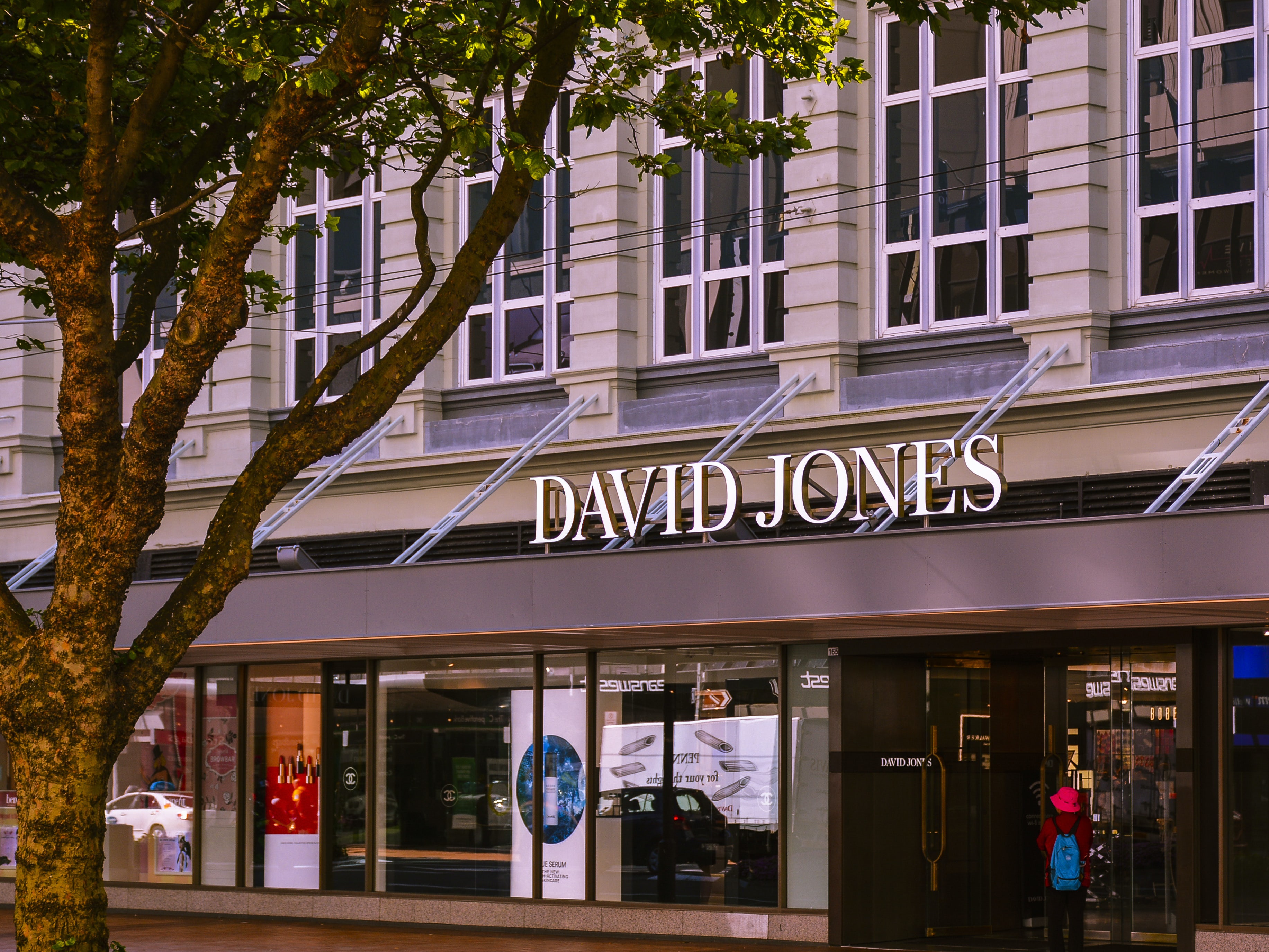 Would Pallister consider partnering with traditional Australian stockists, such as Myer or David Jones? “If we were going to go with a department store, their buyers would have to meet us at the party with what we’re doing,” says Pallister. “That can sometimes be a struggle with the department stores — the buyers have a 12 month buying plan, [but] we are on the pulse and not a lot of people understand that. Our customers get it, but traditional retailers don’t.”

But not everyone is ready to write off the big department stores. “If you look at the way the industry was once structured, the department stores clearly had a closed industry here,” explains McCann from Vogue Australia. “They did a fantastic job promoting brands and putting on huge shows, which from a designer’s point of view, was fantastic. The department stores [were] doing a lot of the PR and brand building, shooting big campaigns and creating designer perception — making sure their brands were known by the consumer.”

Designer Alice McCall agrees, pointing out that David Jones has been a dedicated stockist since the brand’s inception. “I have had tremendous support from David Jones — when we launched they were one of the first people backstage saying: ‘We’re going to support you and buy this collection’ — and they have ever since,” she says.

But some wonder whether the retailers can ever claw back enough of the prestige and market share they once had. David Jones’ attempt to do so has largely been experiential but not focused on fashion: pouring A$100 million ($75 million) into redeveloping its up-market food halls. Myer’s online offering has grown 48 percent year on year, with a concerted effort to improve both product offering and customer service, according to the company.

We are on the pulse and not a lot of people understand that. Our customers get it, but traditional retailers don’t.

Despite their challenges, many believe they still have something to offer the Australian fashion industry. For labels interested in expanding internationally, domestic retailers can provide the ideal testing ground, believes Galambos.

“There’s all sorts of logistical things you need to learn as a brand before you go and work with the online giants,” she says. “[I advise brands to] try homegrown first, because they’re mainly small orders and you can see what your sell-throughs are like — what is working and what’s not — before you target the big players.”

Zimmermann believes that in order to survive, department stores need to become less risk-averse and to work with Australian brands in exciting new ways. “Retailers have to empower [brands],” he says. “Designers need to be able to try their ideas on the public — some will work and some will not, but if you don’t try, you don’t fail.”

Galambos agrees. “[They] have to think outside the box. And if you don’t have the ability to be that creative, be resourceful and find someone who does,” she says. “Unless you trial and error, unless you’re prepared to take a hit and be thick skinned about that, I don’t think there is any other way forward.”

What Amazon’s Arrival Means for Australia