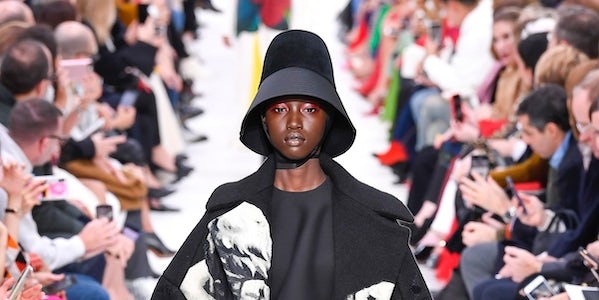 PARIS, France — The Movement for the Emancipation of Poetry (M.E.P. for short) is apparently a Florentine gang of anarchist aesthetes who plaster their city with pages of poetry. Desecration in the name of high culture. Pierpaolo Piccioli is very taken with them. “Something beautiful from the past but it’s in the street,” he mused dreamily before his show on Sunday. It’s kind of what he himself has been doing lately. Creating visions of outlandish, poetic, surreal beauty and taking them outside, into the real world. And even when the images fade — or words printed on paper are washed away by rain — their power stays with you.

Piccioli is an odd duck. You can sense him reaching for an otherness that will nudge him into the unfamiliar. He has taken to collaboration. Piccioli worked on his recent men’s show with the brilliant Japanese designer Jun Takahashi. He brought him back for his new women’s collection, Takahashi supplying an image of entangled lovers which Piccioli utilized as a print or a jacquard or a knit across coats, jackets and dresses. There has always been an innate Gothicism in his work – it was at its most seductive here when Maria Carla Boscono, Vittoria Cerretti and Kiki Willems walked in gowns simultaneously severe and sensual, monastic and libertine — and Takahashi enhances that.

But, in his conversation about shared values, Piccioli also talked about the poets he’d brought to work with him on the collection, their words subtly laced through the clothes and printed in a small book “Valentino ON LOVE” that the audience received. He is making an earnest effort to contextualize his clothing. It might almost be verging on mawkish, but then Piccioli went and played the theme from “In the Mood for Love” on his soundtrack, and his passion was so persuasive.

The clothes helped, of course. As in Piccioli’s remarkable couture, they were best when they had some kind of edge. This show closed with a handful of those pallid, sheer pieces that reminded me of dresses he co-designed with Maria Grazia Chiuri for Valentino in the olden days. One model’s nipples were covered by the words, “Leave your door open for me, I might sleepwalk into your dreams.” Such gossamer ephemeralities were less interesting than the cropped trapeze coats with the bucket/fishermen’s hats (anything short, for that matter) or the cape/coat confections with the scarf sleeve. And now I have to process the fact that I’m most engaged by Pierpaolo Piccioli’s daywear, when the man is probably the best eveningwear designer in the world at the moment.