LONDON, United Kingdom — Shopping for diamonds at Vashi is not a typical fine-jewellery purchasing experience.

Entering the brand’s location on Piccadilly, opposite London’s famed Fortnum & Mason store, there are no security guards in sight. Customers are welcomed into the diamond emporium by smiling shop staff, and met by a modern, sparsely furnished shop space. Instead of pieces on display being housed in large glass units, diamond rings sit on shelves, free of any casing and ready to be touched — no white gloves required.

The vibe is meant to appeal to Vashi’s millennial customers. The brand got its start selling direct-to-consumer diamonds online in 2007. Vashi.com was established in 2013, growing over the next five years as more consumers have come around to the idea of buying engagement rings and necklaces online rather than in luxuriously appointed showrooms. Today, bespoke or customised product makes up 70 percent of the company’s business. 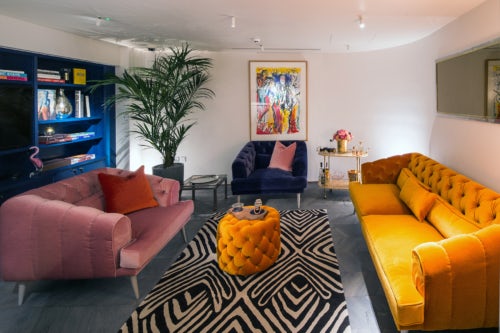 Vashi remains a minnow in the global jewellery business — its 2017 revenue of £8 million ($10.6 million) last year is less than Tiffany & Co. sells in a single day. But unlike its bigger competitors, Vashi has a relatively young clientele. It’s also growing, with the company predicting sales of £20 million ($26.5 million) this year.

Founder and chief executive Vashi Dominguez said the company’s growing network of stores — three locations in London, a 1,200 square foot space at Selfridges London set to open in August and a US expansion in the works for next year — is meant to cement the brand’s status as an antidote to traditional high-end jewellers, which Dominguez says can often become intimidating places to make a purchase.

“[Today’s millennial-minded customer] is looking for an experience. Great product and beautiful service are not enough,” he continued. “We’re centring the experience around [the customer], versus I think most companies are centring around the product.”

The drive to open physical locations was partly an acknowledgment that, while online fine jewellery sales are on the rise, the majority of transactions still occur in-store. Despite brick-and-mortar locations still being relatively new, Vashi sales are roughly balanced between online and in-store.

“Retail is just an extension today, it’s just another channel,” said Dominguez. “There is the internet, there are department stores, there is mobile, there is social, and customers are going to shop however [they want to], so you’ve got to make sure you create an omni-channel experience.”

Developing the in-store model took three years, as translating the brand’s online customisation service into an in-store experience proved a challenge, Dominguez said. “I wanted to give people access to jewellery workshops, but jewellery workshops are generally very dusty environments.” 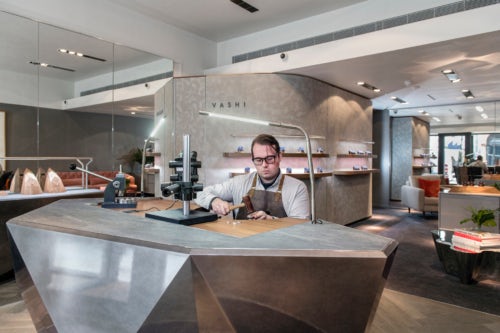 The result: an on-site “diamond lab,” akin to a workshop where customers can be involved in the creation process — one at each location. Now, production for all online and in-store orders happens in the diamond labs, so customisation doesn’t slow down the purchasing process.

“[Millennials are] quite impatient, they want things now,” Dominguez said. “So we engineer our supply chain and build our production in house, so that if you create something and you want to have it today, you can have it today, versus come back in three months.”

As the majority of pieces sold are made-to-order, prime real estate space can be dedicated to furthering customer experience, rather than used to store ready-to-sell inventory. One such example is the Piccadilly store’s “VIP rooms,” which are, in fact, open to everyone. Plush sofas, art on the walls, plants, coffee table books and even a record player give the room a more intimate feel.

“Even if you’ve just come in and you want to learn about the brand, we bring you in, you can have a Corona beer or a glass of champagne,” says Dominguez.

Will Lab-Grown Stones Save or Sink the Troubled Diamond Market?