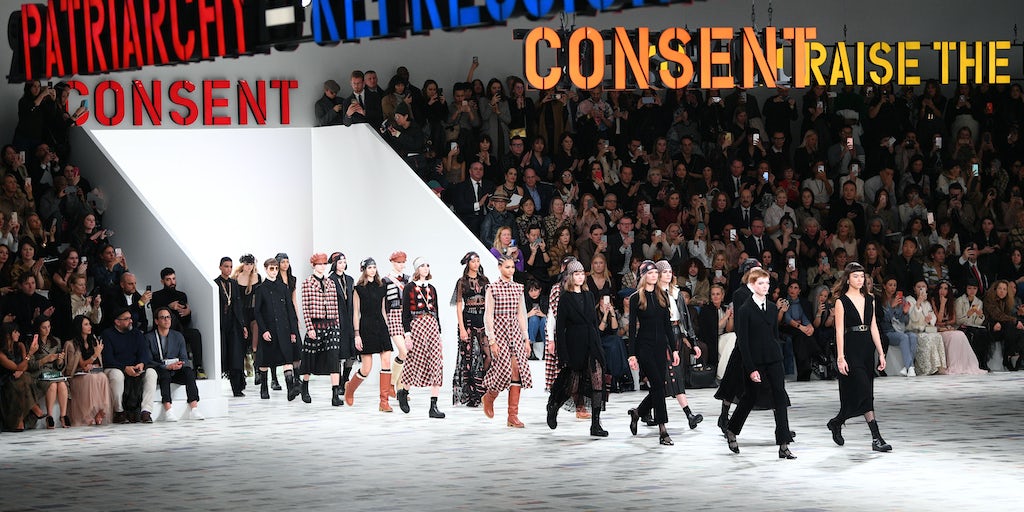 PARIS, France — Cancelling live events far in advance — particularly those that rely on an international crowd — has been the norm since the coronavirus and lockdown measures to contain it rolled across the world this spring, with happenings scrapped or postponed as far out as next January’s Golden Globes.

But heavy hitters in the European luxury industry have bucked that trend in recent days, with several houses saying they’re committed to staging live fashion shows in September.

Statements by brands including Christian Dior, Burberry and Fendi suggest that brands want to pivot away from online-only events as quickly as possible, even if digital engagement with end consumers will remain a key component of their strategy. Chanel, too, has thrown its weight behind staging physical shows again as soon as possible. FHCM, the French trade federation that organises Paris Fashion Week, confirmed this morning that September’s ready-to-wear week was a go.

“The Fédération de la haute couture et de la Mode confirms the holding of Womenswear Paris Fashion Week,” read a statement issued by FHCM on Wednesday morning. “It will take place from Monday September 28 to Tuesday October 6 and will comply for its implementation to the recommendations of public authorities.”

Brands are convinced that physical fashion shows are powerful enough tools to be worth staging despite unprecedented uncertainty around what the shows will ultimately look like or who will be able to attend, as health and travel restrictions remain in flux.

“Even if the current situation has led to a great deal of innovation in online projects, nothing can replace the physical event,” Pascal Morand, executive president of the FHCM said in an interview with BoF, adding that although brands were quick to cancel their physical events for menswear and couture this summer, replacing them with digital-only activations, the “majority” of Paris houses want to stage at least some sort of physical event this September.

Even if the current situation has led to a great deal of innovation in online projects, nothing can replace the physical event.

A widespread distaste for uncertainty, pressure on marketing budgets and a desire among some brands and designers to reconsider their business practices and re-examine what some have called a “broken” fashion system had led houses including Gucci and Saint Laurent to reassess their participation in this autumn’s fashion month.

But this week the tide turned as Burberry said it would hold a live runway show outdoors at an unnamed location in Britain on September 17, with only models and staff physically present. Fendi confirmed its plans to stage a show at their Rome headquarters on September 22, with some guests attending physically.

Dior said in a press conference Monday that it would test the waters of staging runway shows again with a July 22 cruise show — this time with no guests — but that the brand hoped to invite a crowd for the unveiling of their Spring/Summer ready-to-wear collection during Paris Fashion Week this autumn.

“We will follow the rhythm of the fashion weeks. It’s a lot of business, a lot of things attached to it, not to mention the tradition,” said Pietro Beccari. “In Paris in September, we hope to be able at least to have some audience, if not a full room.”

Traditional fashion weeks bring together participants from around the world, including brands, models, journalists, influencers and front-row celebrity guests. But many major European brands seem to have decided that a scaled-back, more local fashion week is still better than no fashion week at all. They’re moving ahead based on the assumption that models and editors from within Europe and UK will be able to attend, while guests from the US and Asia likely will not.

That fashion week appears increasingly likely to move forward in some form in key markets like Paris is “great news for the sector,” according to Alexandre de Betak, a producer who stages shows for clients including Dior, Saint Laurent and Jacquemus. His agency Bureau Betak is among the many companies, including modelling and casting agencies, photo agencies and others, which depend on fashion week for their sustenance.

According to Betak, brands will make even greater use of live streaming and other digital tools, integrating them with in-person events. In light of the combination of deep cuts to marketing budgets and the added expense of putting in place various health precautions, some brands are likely to experiment with alternative formats to the traditional runway show, such as walk-through presentations or exhibitions, but Betak hopes they will principally be live events with in-person elements.

“It’s great to experiment, now more than ever as people are ready for a change,” Betak said. “But online-only hasn’t managed to create the same excitement so far as a live show. It can’t compete with the adrenaline, the momentum.” Even a small audience can be powerful for pulling in people’s attention when you broadcast online, he added. “It’s very contradictory, but the excitement comes from watching something you were not invited to.”

A live audience is key for helping brands diversify, amplify and add cultural legitimacy to marketing messages and coverage coming from the event, as users on social media are drawn to a broad range of intimate and spontaneous content from the margins of an event — whether its models backstage or celebrities arriving — shared by influential attendees more so than to static images or formal clips from the brand.

“When you invite between 500 and 1,500 guests for a fashion show, those guests become content creators: they’re writing articles, posting on Instagram and tweeting, this has an enormous impact,” said Alison Bringé, chief marketing officer of the data consultancy Launchmetrics.

Launchmetrics says that brands who opt to include no physical audience or a very limited one will need to think creatively about how to recreate that amplification effect. Influencers and media outlets will be hungry for exclusive content, so offering ways for them to participate through unique posts or coverage opportunities will be more effective than sending the same package of videos and images to everyone, she advised.

A failure to adequately tackle that challenge may be one reason London Fashion Week online-only event in June failed to garner much attention. Coverage of the event on social media and in the news was about 55 percent less valuable than the year prior, Launchmetrics estimates.

Who Will Win the Digital Fashion Week Battle?