NEW YORK, United States — Inside Soho News, a convenience store and specialty magazine shop in lower Manhattan, tall stacks of thick magazines line the walls. Shoppers navigate carefully through the narrow aisles, where everything from the Hola! tabloid to Computer Music magazine is for sale. But the best real estate is saved for giant fashion and style magazines, many of which look more like coffee table books.

Owner Bhavin Sheth said the number of fashion publications for sale has increased in recent years, though it’s hard to say exactly by how much. Right now, he probably has around 50 titles in that category alone. Discerning readers can pick up Fantastic Man and find an 18-page editorial featuring two models gently arguing in soft autumnal layers. Or grab Office and read an interview with Jeffrey Cheung, the artist behind San Francisco’s queer skateboarding collective, Unity. Or check out the latest issue of Spanish men’s fashion title Fucking Young!, where an interview conducted over WhatsApp includes photos of a cat learning how to use a toilet.

The internet allegedly killed fashion media years ago, claiming decades-old titles from Details to Look, along with many of the newsstands and bookstores that sold them. And yet, the market for niche fashion magazines — high-concept biannuals and quarterlies that rely on expensive print issues sent to in-the-know subscribers or sold in specialty stores — is more crowded than ever. 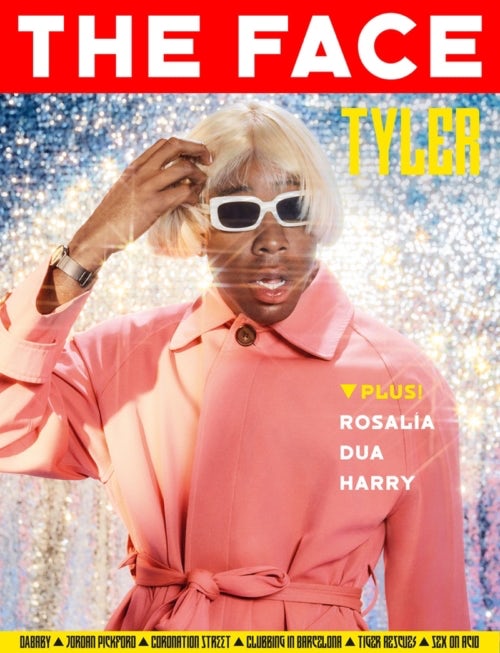 Mainstream magazines have tried to copy some of their smaller competitors’ flair for bold and clean design, and tongue-in-cheek editorial concepts. The clean, white-bordered cover of a recent Entertainment Weekly, featuring indie film darlings Saoirse Ronan and Timothee Chalamet, for example, could be mistaken for an issue of the sophisticated women’s biannual The Gentlewoman. But the cover is where the similarities end with Meredith Corp.’s more mainstream film and television publication.

Niche publications’ audiences may be much smaller (an independent magazine’s circulation is typically between 20,000 and 200,000 copies, versus more than a million for American Vogue), but the boutique approach has built a loyal following of both readers and advertisers.

In the last year alone, The Face returned under new ownership after a 15-year hiatus, Interview emerged from bankruptcy more or less intact, Fantastic Man invested in a redesign, and sister publication The Gentlewoman celebrated its 10th anniversary, the satirical title Buffalo Zine marked its 10th issue.

Meanwhile, Berlin’s 032c has a growing ready-to-wear business, which debuted on the runway last year. Issues of Vice’s i-D, independent in spirit though backed by an online media giant, look thicker than ever. Dazed Media expanded to China with the help of investor Adrian Cheng. And then there’s the other stalwarts of the genre that are still putting out regular issues with A-list celebrities on their covers and plenty of ads for luxury brands inside: Pop, Love, System, Paper and many, many more.

There is room for all of these publications in part because fashion itself has gone mainstream, broadening the potential audience, said Jeremy Leslie, founder of MagCulture, the magazine-focused London design studio, shop and events producer.

“The people in [these magazines] are not just fashion people, they are big cultural icons,” he said. “Our fashion section at the shop is just bigger than ever at the moment.”

I try to think of brands as partners, not advertisers.

Specialty titles on both sides of the Atlantic also tend to have wealthy backers, who insulate their passion projects from the financial pressures of the media business. For example, when Interview filed for bankruptcy with over $3 million in debt in 2018 and shut down temporarily, it didn’t even miss an issue. And the owner of The Face, Wasted Talent, told The New York Post it plans to spend about $6.2 million over the next two years building the business up to profitability.

But there’s more to many of these publications than an owner with deep pockets and endless patience. Many titles have low overhead, which the high cover price can cover. (Each issue of stylist Marie-Amelie Sauvé’s Mastermind publication is €40, for example). The most successful have also honed their sales pitch to luxury brands: glossy print ads as a form of cultural validation.

For example, when the Instagram fashion brand of the moment, Nanushka, shot its first print advertising campaign, it placed it in the fall issues of Fantastic Man and other specialty titles.

“The success of Nanushka originated in the digital space, on Instagram, on social media, through influencers, so for us to take this whole experience to the offline world — it has to be a very cultured approach,” said Chief Executive Peter Baldaszti.

Deep into the influencer era, niche titles have managed to maintain their status as fashion and culture authorities depending on the editors and stylists on staff. They can attract respected or up-and-coming stylists, photographers and writers eager to prove themselves, offering creative freedom (albeit with low to non-existent budgets, often covered by the photographer themselves). These talents legitimise otherwise obscure publications in the eyes of advertisers.

Take the debut issue of The Face, which relaunched in September with a thick issue featuring four A-list covers for the young style set: Tyler the Creator, Rosalía, Dua Lipa and Harry Styles. The magazine hired photographers Juergen Teller and Collier Schorr for the covers and featured a 16-page spread of images from artist Jim Goldberg, who shot Palace skateboarders in San Francisco. (The issue, available for £10, is being re-released as a limited edition hardcover for £120).

“I think people are hungry, they want optimism, they want a broad perspective on the world, they want people who are going to challenge convention,” said The Face’s Gonsalves.

Brune Buonomano, publisher and co-founder of Mastermind, said brands that advertise with publications like theirs are putting themselves in a positive cultural context. Her partner Sauvé is known for her long creative collaboration with Louis Vuitton‘s Nicolas Ghesquière and is the fashion director at T Magazine: The New York Times, but she and Buonomano focused their hardback title on culture at large and discovering new talents. It has no companion website and only publishes twice a year to keep the “value of the object” high.

“Brands today have to choose, sculpt, define and handle their cultural footprint because it can be negative,” said Buonomano, who is also the head of the creative agency BETC Étoile Rouge in Paris. “It has to be relevant, responsible, long-lasting, sustainable.”

Independent titles still have to compete with media conglomerates for print advertising, a pie made smaller by the rise of digital advertising dominated by Facebook and Google. Many have used their cultural clout to diversify into other businesses, from public relations and events to developing creative content for brands. In some cases, including 032c’s clothing, the side hustle has come to carry the magazine financially. 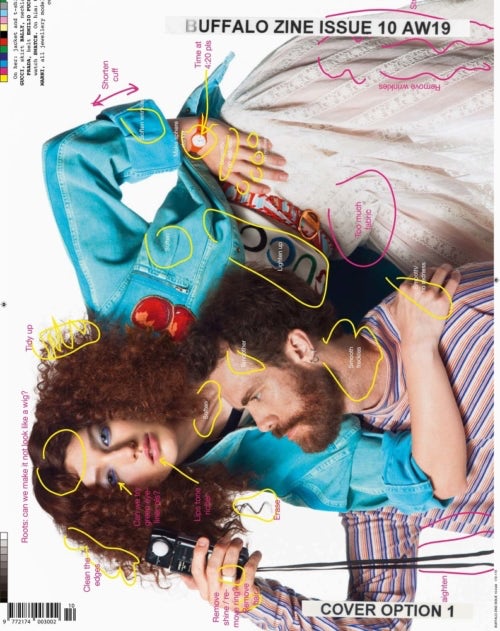 Smaller magazines “sell their creativity and invite advertisers and brands to be in on the joke with them,” said MagCulture’s Leslie. “There will be lines you can’t cross, but they are open to being pushed.”

By pitching creative services, indie publishers also put themselves in the running for brands’ digital marketing budgets, which are larger and more flexible than their allotments for print advertising.

For example, Interview recently hosted a Studio 54-themed party for Michael Kors, whose autumn collection was inspired by the famous nightclub, and held a dinner for Nordstrom commemorating the magazine’s new 50th-anniversary book. The team behind The Gentlewoman and Fantastic Man created a publication for H&M Group’s brand, Cos.

Special projects like events and branded content “are a way for us to embrace our niche” and give advertising clients “a certain amount of creative liberty and the ability to create things they don’t feel like they can do on their own,” said Jason Nikic, chief revenue officer of Interview’s parent company, Crystal Ball Media.

Of course, a niche publication’s creative energy is by definition a difficult business to scale. These titles will also have a harder time standing out as the market grows crowded. The Face didn’t have to compete with Dazed and i-D in its 1980s heyday.

“There’s a lot of overlap amongst these magazines … the same models, the same stylists, the same photographers, the same brands being featured,” said Leslie. “A lot of them do struggle to find their own unique niches — they live or die on whatever the big story is that they can get for their new issue.”

A luxury marketing executive, who was not authorised to speak publicly, said that brands typically pick one niche title each year to partner with on bigger projects because they see most of these publications as essentially interchangeable, speaking to the same type of readers.

These titles also face competition from large publishers, which are building out content studios and event production teams that allow them to offer brands a mix of print and digital ads as well as creative services.

At the Elle‘s or Vogue‘s of the world, branded content is typically produced by separate teams rather than the editorial staff, and requires more overt labelling as paid content. Some smaller titles, including Mastermind, follow this model as well, operating separate editorial and creative teams.

But developing close commercial relationships with brands can be lucrative.

“I try to think of brands as partners, not advertisers,” said The Face’s Gonsalves, who said the title will generate more revenue from custom video projects than print advertising. It has other tie-ins, too: Gucci licensed The Face’s logo to put on T-shirts ($550) and sweatshirts ($1,400) for its pre-fall 2019 collection. Last month, the magazine opened a pop-up shop with Converse in London, where fans of cover subject Tyler the Creator could meet him and pick up special editions of his Chuck 70 shoes.

Ultimately each title has to find its own approach.

Benjamin Barron, the photographer and founder of All-In — a magazine about artists with a strong sense of style, has published four editions since 2015, on an irregular schedule. The magazine also has a ready-to-wear collection of one-of-a-kind pieces available at New York boutique Maryam Nassir Zadeh and is in the process of developing a design magazine for Airbnb’s studio Samara.

“We haven’t had one set business model,” Barron said. “It’s been lucky that things have fallen into place over the last couple of years.”

How Do Independent Magazines Make Money?

The Face Is Back

How Interview Magazine Came Back From the Dead