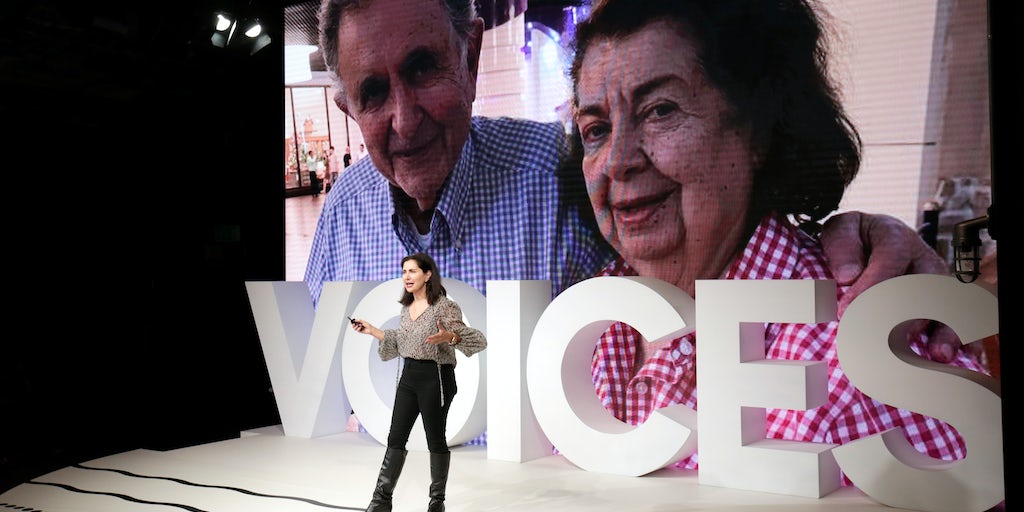 OXFORDSHIRE, United Kingdom – Joy Ajlouny, co-founder of Fetchr, went from being so depressed she was unable to leave her room after breaking off an engagement to a “Silicon Valley legend” to being on the cover of Forbes Middle East.

“Being a woman in tech has been the hardest thing I have ever done in my entire life. Of all funding in Silicon Valley, only 2.7 percent goes to women founders who have raised a Series A [round of funding] and above, probably making me the one percent,” Ajlouny said on the stage of VOICES, BoF’s annual gathering for big thinkers hosted in partnership with QIC Global Real Estate.“When I’m surrounded by men and I’m a woman who has a very strong personality I’m called a bitch, I’m called aggressive, I’m called disruptive, I’m called problem making, I’m called difficult.”

Fetchr, the e-commerce company she co-founded with Idriss Al Rifai, was named as the number one startup in the Middle East last year by Forbes Middle East, having raised $52 million in funding at the time from New Enterprise Associates, 500 Startups, Dhabi Holdings and Winklevoss Capital.

Fetchr is a delivery service that uses customers’ phones to locate them, making it possible to send packages to people on the move or with no addresses. According to Ajlouny, the platform, in the process of raising another $100 million, is “solving the problem of no addresses in the Middle East, because half of the world has no addresses.”

“Every day I fight. That bull in a China closet spirit drives me every day. I am relentless, I am unyielding,” she said. “The one thing that got me here is that I realized in this world of Instagram where everyone is worried about what everyone thinks of everyone else, I adopted a really great saying: No one can make you feel inferior without your consent. Eleanor Roosevelt said that.”

This is the mentality Ajlouny soon adopted after overcoming an “amazing amount of depression,” which drove her to start her first company in 2012, Bonfaire, an e-commerce platform for undiscovered brands. She sold the company to Moda Operandi at the end of 2013 and soon turned her attention to building Fetchr.

To learn more about VOICES, BoF’s annual gathering for big thinkers, visit our VOICES website, where you can find all the details on our invitation-only global gathering, in partnership with QIC Global Real Estate.