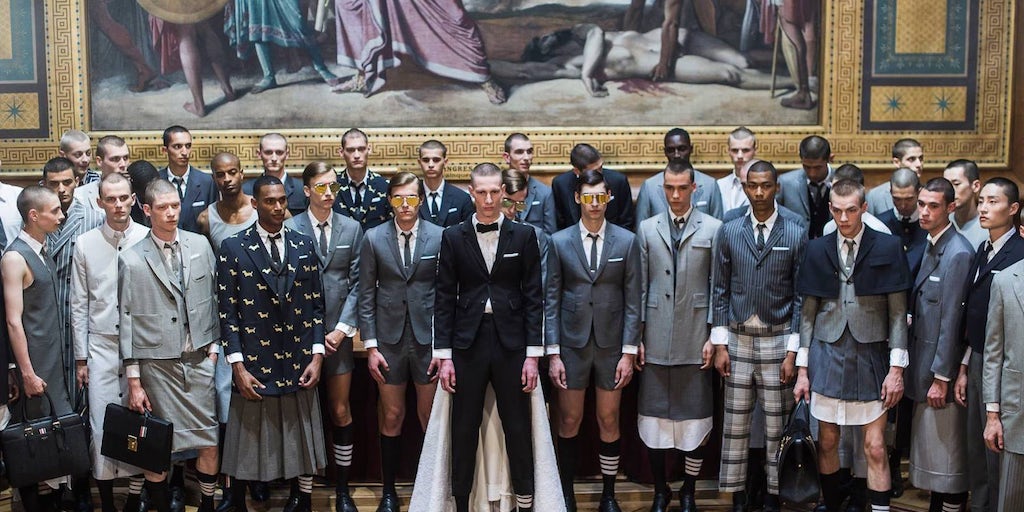 MILAN, Italy — Could Thom Browne be the next Ralph Lauren?

The American designer label, best known for its intellectual and imaginative take on silver-spoon tropes — most notably, its signature shrunken grey suits — is partnering with a strategic investor on a bold expansion plan that will likely broaden its customer base and reach.

Today, Thom Browne announced that Italian menswear stalwart Ermenegildo Zegna Group has acquired an 85 percent stake in the company, valuing the business at approximately $500 million. Browne, the label’s founder and chief creative officer, is the only other remaining shareholder. The transaction marks a brisk, successful exit for private equity firm Sandbridge Capital, which has held a majority stake in the brand since 2016.

Chief executive Rodrigo Bazan, who joined Thom Browne in 2016 from Alexander Wang, will continue in his role. According to a report in The New York Times, Thom Browne generated $100 million in sales in 2016 and was on track to reach $120 million to $125 million in 2017.

In July 2018, Bazan said the company is still growing, with 31 directly owned retail stores in New York, London, Milan, Tokyo, Hong Kong, China, South Korea and Singapore. (A store in Miami is set to open in October.) “If anything, we’re containing the growth,” Bazan said.

“My goal is to keep Thom Browne independent,” Ermenegildo Zegna, chief executive of the Zegna Group, told BoF. “It’s a good company, a good organisation, a good business and profitable. The company has to stay autonomous from Zegna with support and help from the group. It will be a gradual approach. If something is working, don’t change it, just support it.”

In addition to leveraging Zegna Group’s global reach to expand the Thom Browne retail footprint, the New York-based fashion house will also benefit from Zegna’s expertise in fabrics and manufacturing. While Browne has volleyed between manufacturing in the US and Italy, most of his clothing is now produced in Europe.

Browne said that he was “proud” of the new partnership. “I think the most important thing is that Zegna represents the best quality,” he told BoF. “As conceptual as my collections may be, the quality is the most fashionable part of what I do across the board.”

In return, Thom Browne will provide a contemporary fashion play for the family-owned textiles giant, whose current portfolio includes its flagship luxury menswear brand, sister-line Z Zegna and womenswear label Agnona. Zegna described the Thom Browne brand as one that appeals to consumers with a “millennial mindset.”

“I never put an age to it,” added Browne. “I think it’s just because of the way I approach design. It’s the youthful sensibility and spirit.”

Zegna also cited Thom Browne’s “thriving” women’s business — which launched in 2011 and now makes up 35 percent of sales — and its resonance with younger generations as proof that the brand will offer long-term value for the group. The deal also marks Zegna’s first notable investment in an American brand in recent history. “Both Thom Browne and Zegna have not fully utilised the opportunity of the US market, which is growing very very well, second only to China,” he said. “We believe in the market, and we can do much better with both brands.”

In July, he announced a partnership with Spanish football club FC Barcelona as the team’s official off-field outfitter. Most recently, the company has been working on signaling that Thom Browne is about more than runway showpieces and suiting. “That’s one of the reasons we bought Thom Brown,” Zegna said. “He’s the master of fun casualisation.”

Relaxed, yet still stylised, pieces — from sweatpants to quilted jackets — now play a starring role in the line’s commercial collections. At the time of the Barcelona announcement, Bazan said that that the brand will “continue to expand the product pricing architecture to touch more consumers, while continuing to prioritise quality.”

For Browne, the deal marks natural progression. While it was adamant on maintaining a financial stake — “I founded the business and it was just really important to know that I still had a piece of it,” he said — the series of investors he has brought on over the years, from Japan’s Stripe International to Sandbridge and now Zegna, have helped to continue building the business in the way he wants to build it: led by creativity.

“The most important thing for me that there was a real personal connection to all of them. It’s the reason why they worked,” he said. “With Ken and Sandbridge, it worked because we had a really close friendship. It’s refreshing to know that you can grow a successful big business and still be a gentleman. Sitting down with Gildo, I saw in him a true gentleman.”